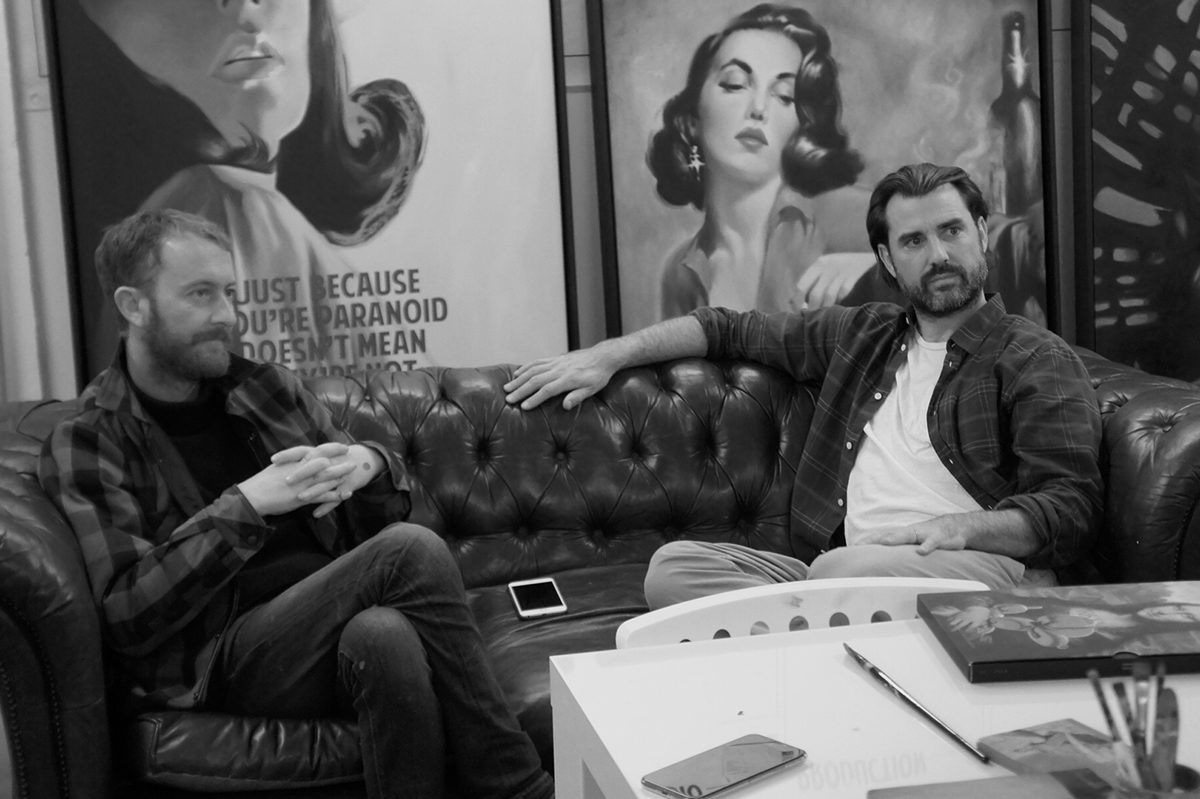 A fantasy World of intrigue, danger, passion and romance. This is the iconic Art by an artistic duo known as The Connor Brothers 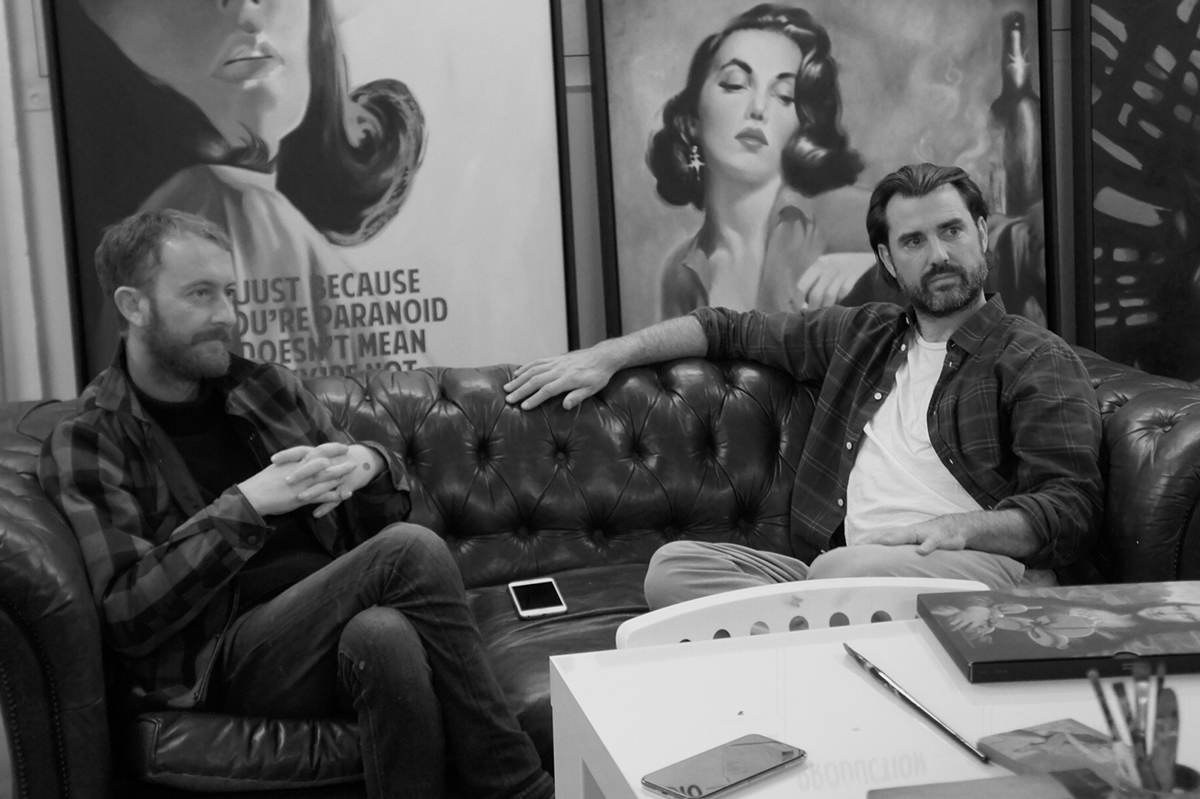 A fantasy World of intrigue, danger, passion and romance… Berkeley Bespoke had a pleasure to meet Mike Snelle and James Golding, the artistic collaboration that is internationally famous for their satirical reinterpretations of the contemporary World.

Who are The Connor Brothers?

The Connor Brothers is the pseudonym for British artists James Golding and Mike Snelle. The duo came to prominence in 2012 and for several years maintained their anonymity by using a fictional biography.

Best known for their Pulp Fiction series the pair are also known for their activist work and their playful hoaxes. In 2014 they created a fictional museum – The Hanbury Collection, which fused truth and fiction in such a way as to render it impossible to work out which exhibits were real and which were not. This obsession with truth and fiction can be seen throughout their work, and is particularly relevant in the current climate of fake news, post-truth and social media obsession.

The Connor Brothers have been amongst the most prominent artistic voices to comment on the refugee crisis. The duo worked for several years in The Jungle refugee camp in Calais building shelters and undertook an international billboard campaign highlighting the plight of displaced people – Refuchic.  Closely associated with the Russian activist group Pussy Riot, The Connor Brothers produced their 2015 refugee themed theatrical performance at Banksy’s Dismaland. More recently they have teamed up with Professor Green and the mental health charity CALM to raise funds and awareness about the UK’s epidemic of male depression and suicide.

The Connor Brothers have exhibited internationally from New York, Sydney and Dubai to London, Hong Kong and Berlin. Their work frequently appears at major auction houses where a record price was achieved in 2016. Works can also be found in major public and private collections including The Victoria and Albert Museum, The Penguin Collection and both the Omar Koch and Niarchos Collections. 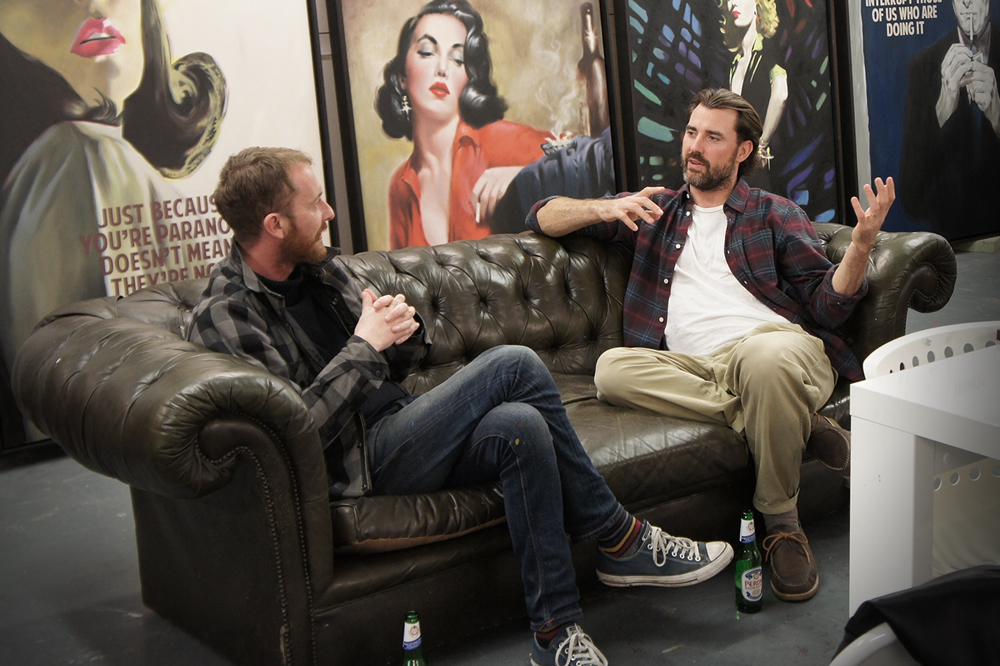 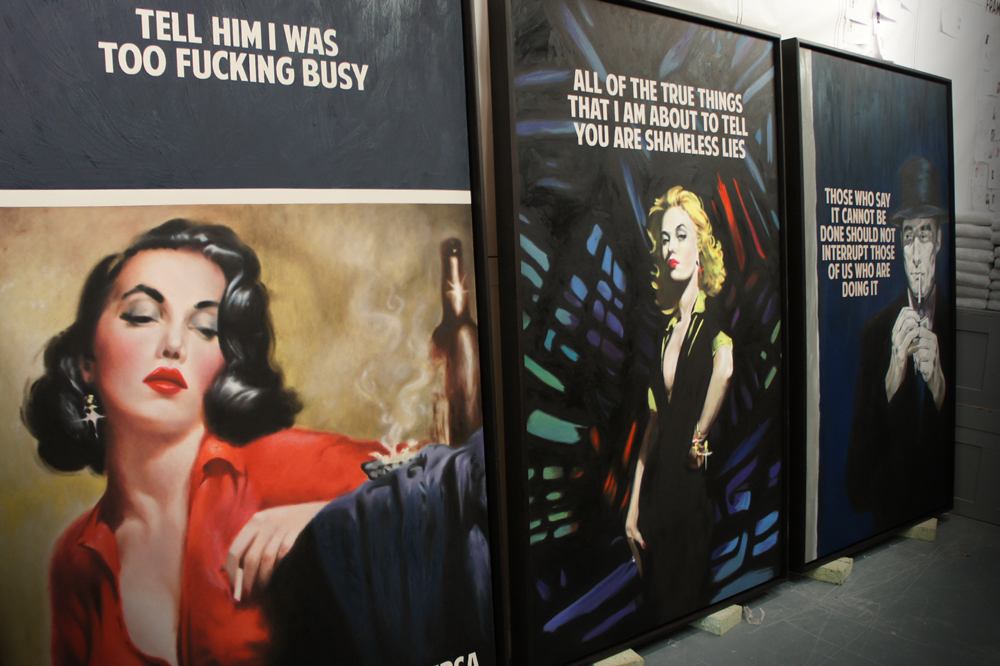 Many collectors have chosen to buy The Connor Brothers art at various fairs in London as well as sell-out shows at galleries in Los Angeles and Sydney. They have made and sold more than 100 artworks in total – but who are they?

According to their website, twins Franklyn and Brendan Connor were brought up within a secretive Christian cult called ‘The Family.’ Along with other children, including the actors River and Joaquin Phoenix, they were deprived of access to mainstream media from outside the commune.

When the twins ran away at sixteen and settled in Brooklyn, New York, they were initially overwhelmed by the outside world, but felt an insatiable curiosity and remarkable appetite to learn. They would share new discovery with one another via notebooks and sketchpads, making art together in a process they described as ‘trying to make sense of the world.’ 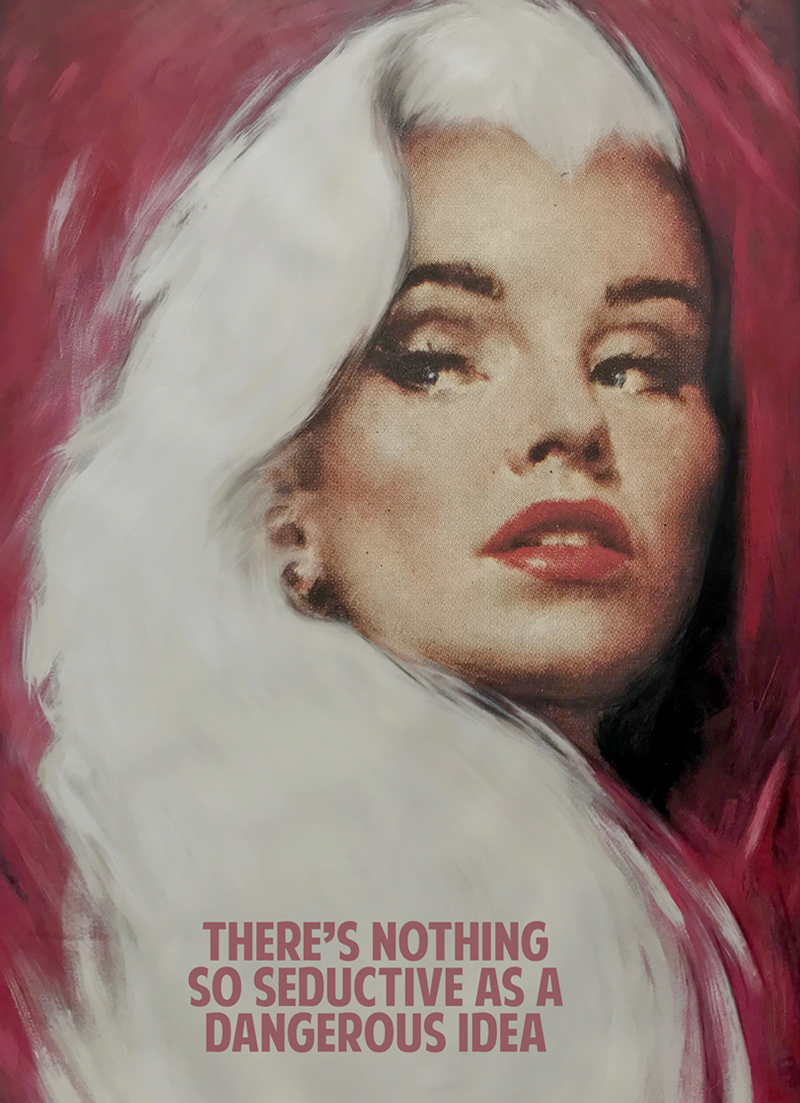 The reality of The Connor Brothers art

Snelle and Golding really had begun to work together as a form of therapy, inventing The Connor Brothers as a cover to protect themselves from public exposure. They eventually chose to break cover from their detailed disguise once their work saw widespread success.

Snelle argues that this is the paradox of art. While artifice is often the best way to depict reality, fiction can also be the best way to challenge conventional concepts of the truth. 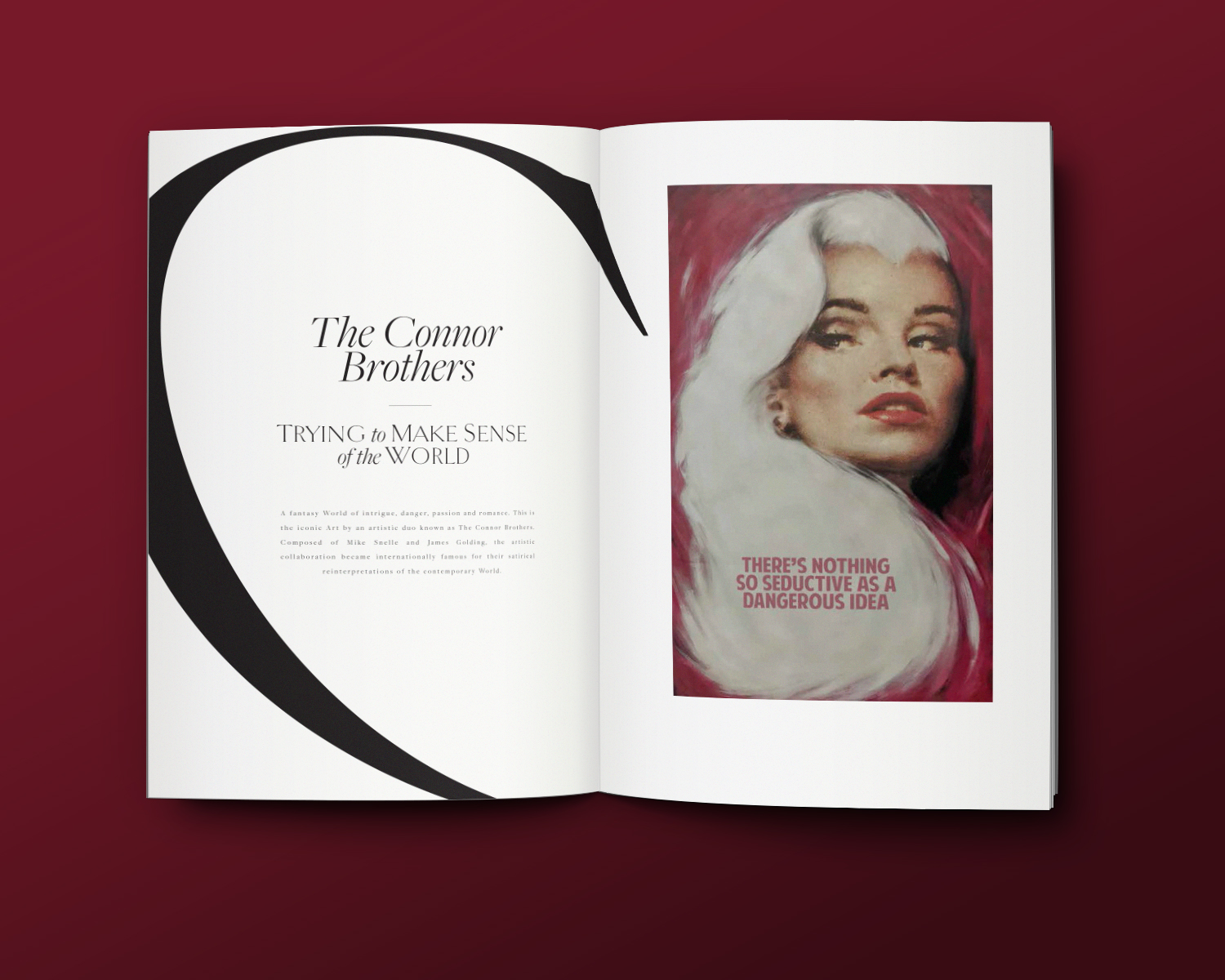 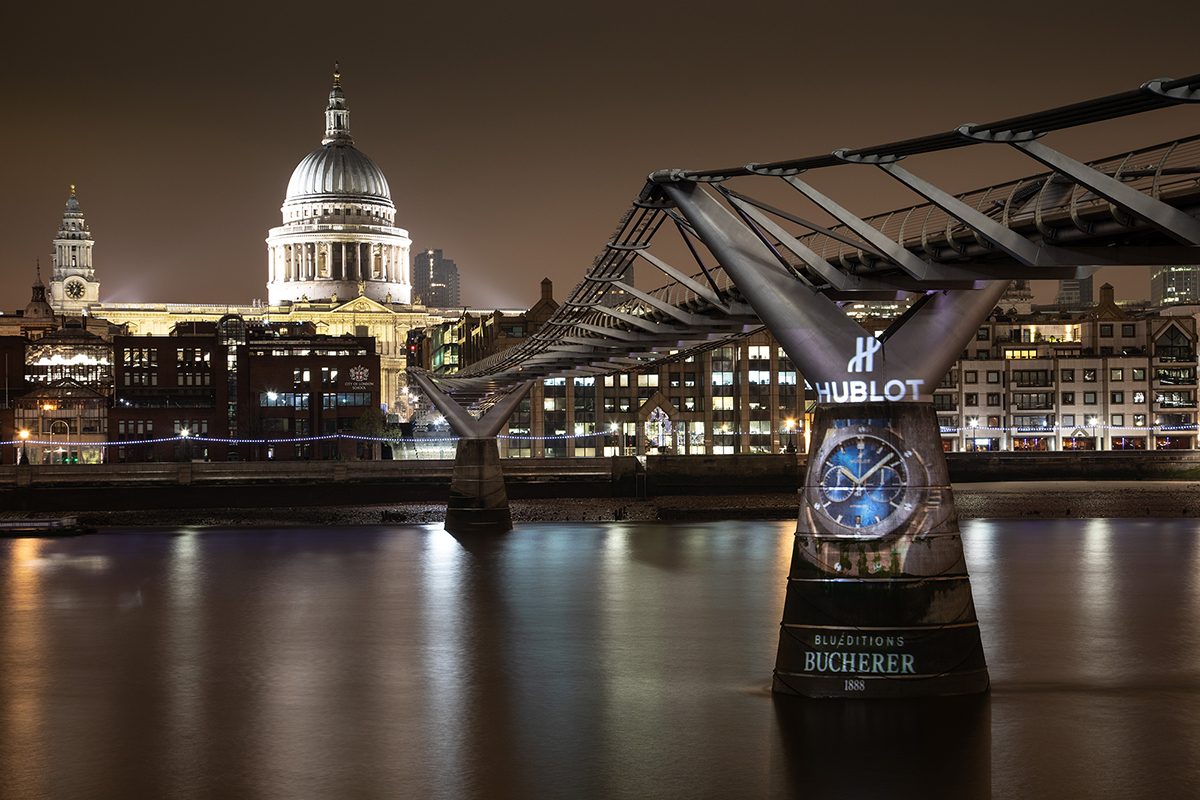 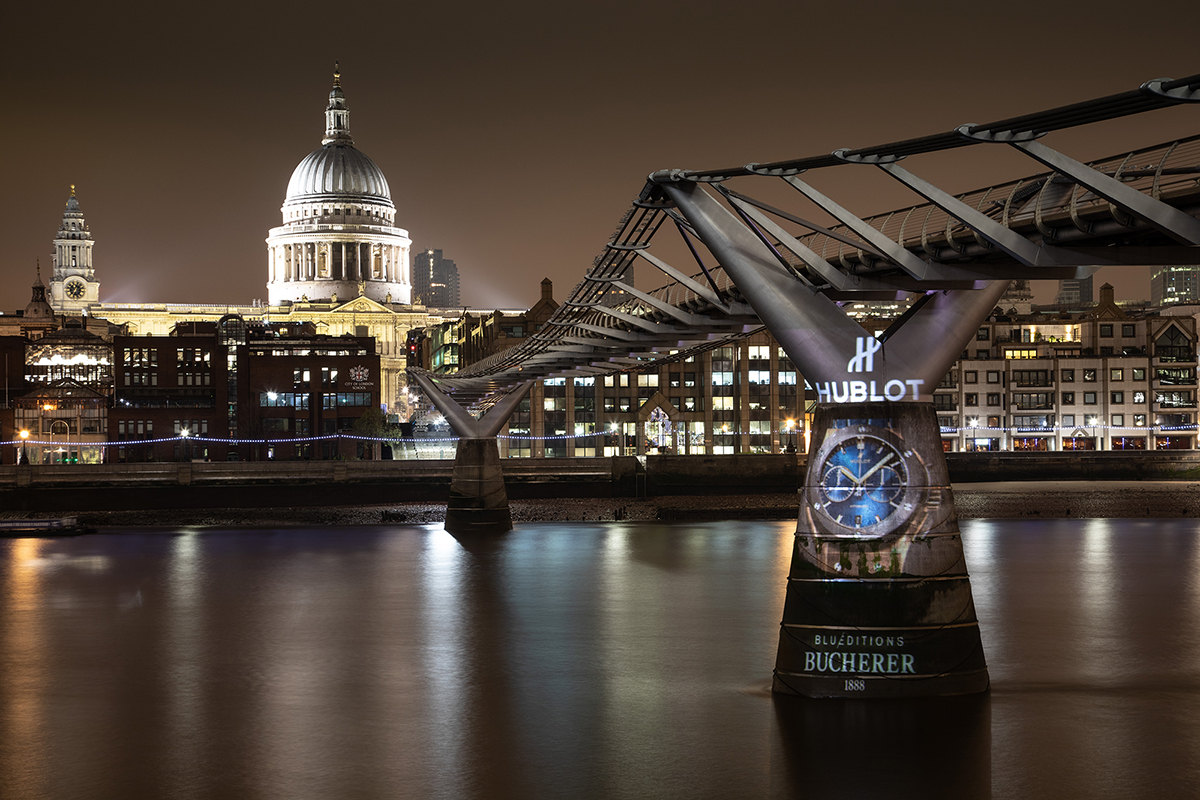 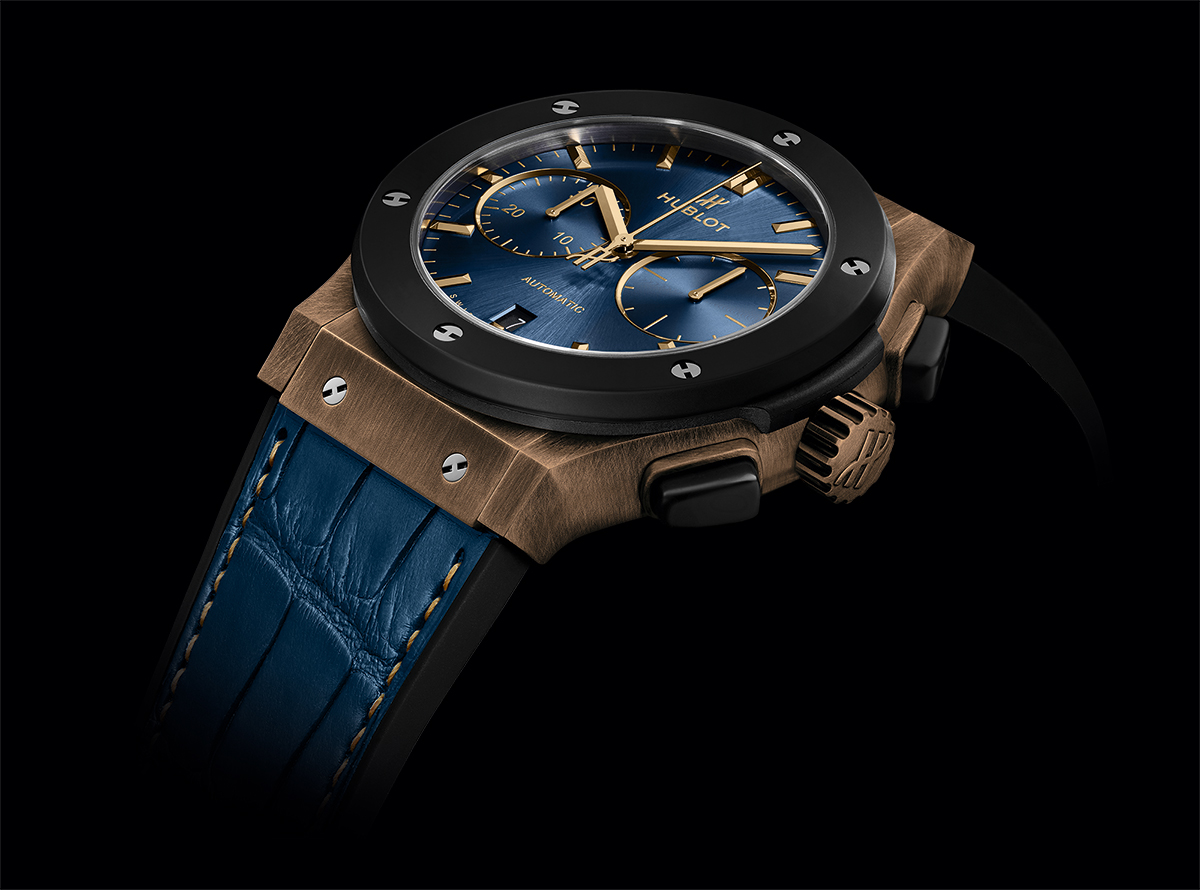 150 special guests including Maxime Büchi, famed graphic designer, tattoo artist, founder of the Sang Bleu studio and Hublot Ambassador, were invited to celebrate the launch within one of London’s most iconic and recognisable landmarks; Tower Bridge, where the historic upper walkways were illuminated in vivid blue for the evening.

For the first time, to highlight the launch of the exclusive limited edition, images of the watch were projected over iconic London monuments including The Tate Modern, Marble Arch, The Wellington Arch, The National Gallery, Millennium Bridge, Tate Britain and Baker Street. 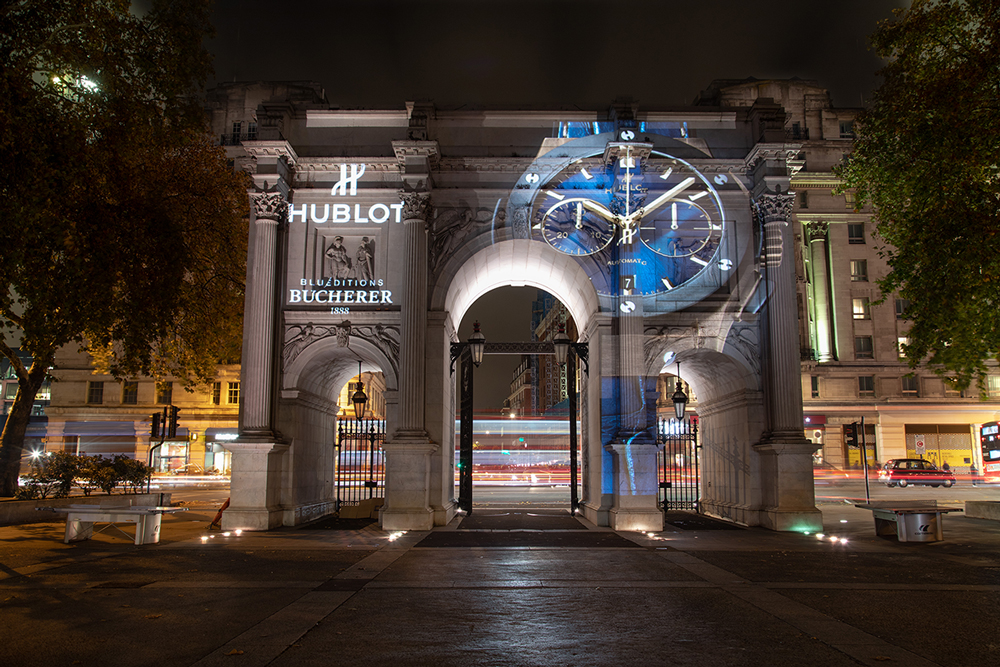 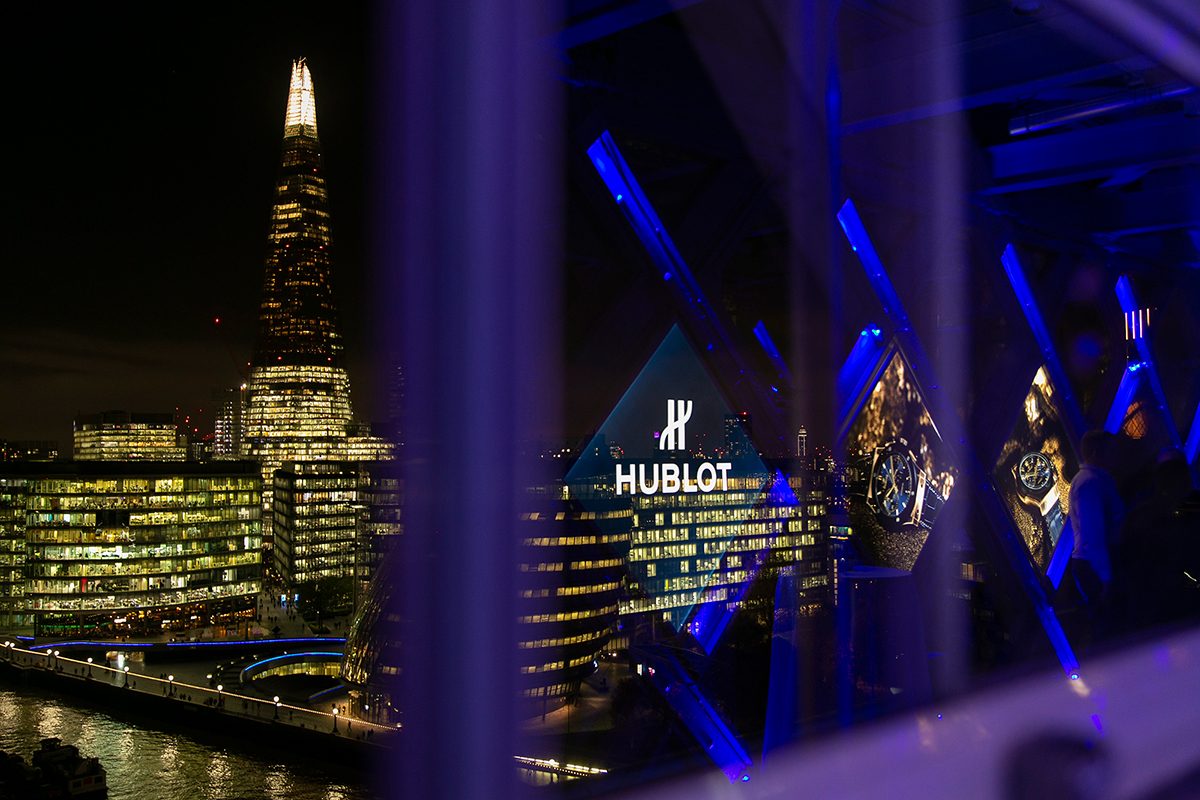 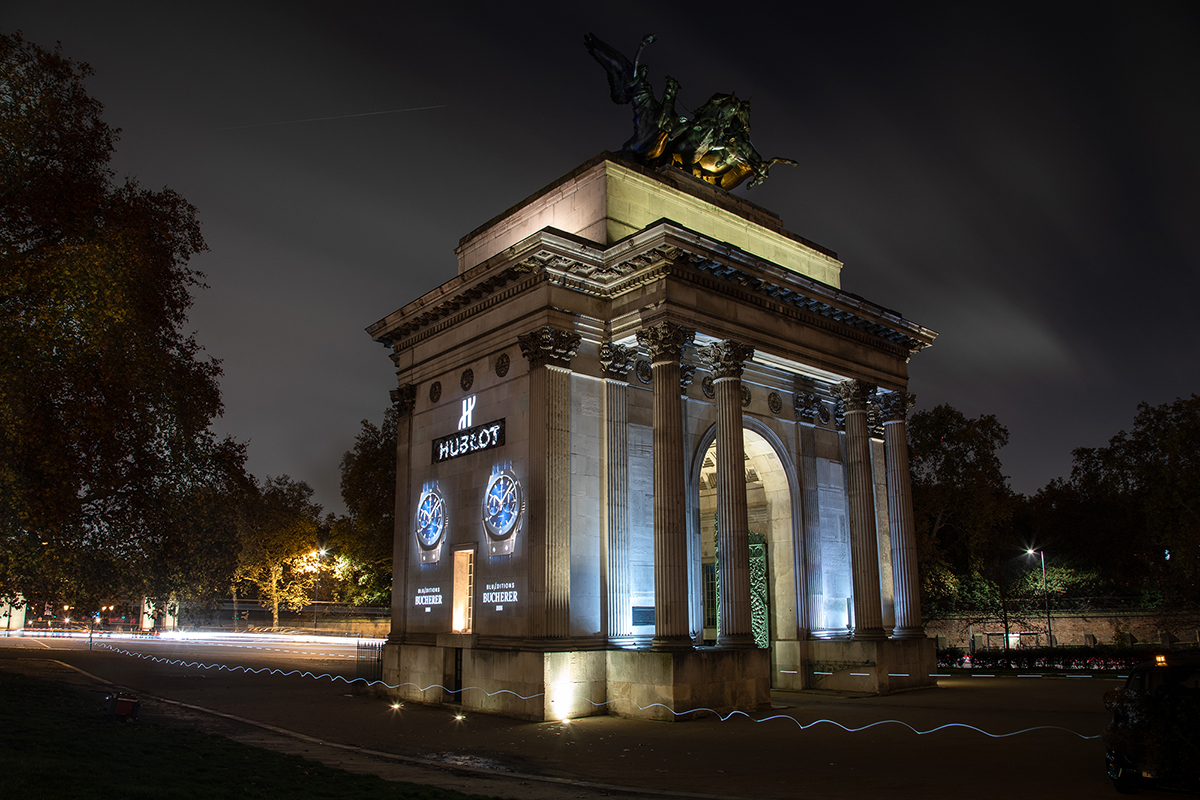 This fascinating mix of opposites resulted in a truly unique approach to creating the new timepiece for the Bucherer Blue Editions. The philosophy behind the Classic Fusion collection is the watch manufacturer’s vision to combine classic watchmaking, pioneering design and outstanding craftsmanship. The special edition Hublot has created for Bucherer celebrates this unique Art of Fusion and disruptive design featuring the combination of precious metals and industrial materials that Hublot pioneered with the Classic Fusion watch created as an homage to the brand’s original designs in the 1980s.

In the Classic Fusion Bronze Bucherer Blue Edition, Hublot for the first time combines a bronze case with a black ceramic bezel and six H-shaped titanium screws – an unusual and masculine blend of materials and colours that create a bold style statement. 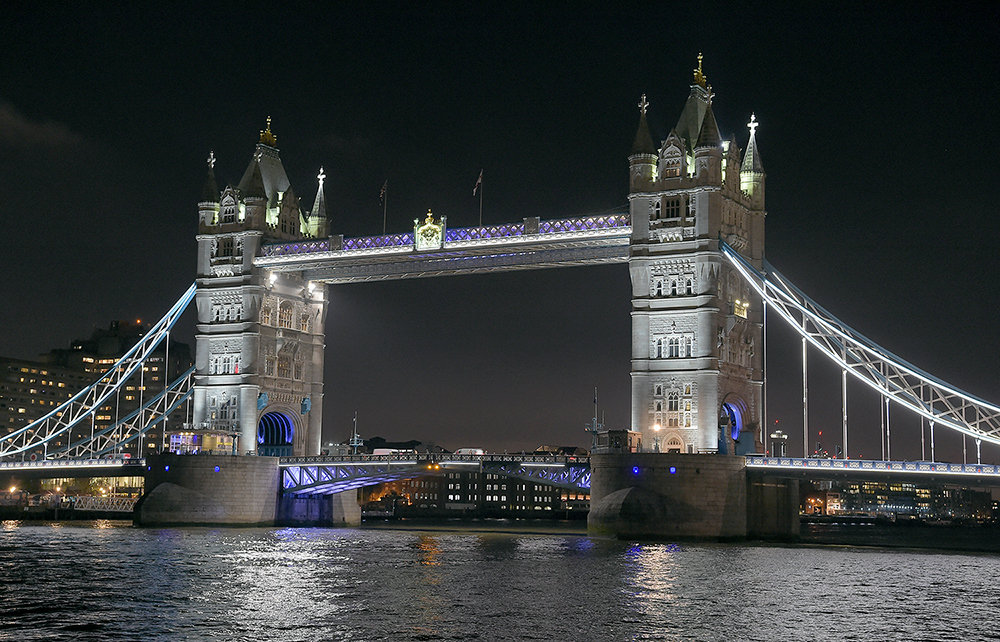 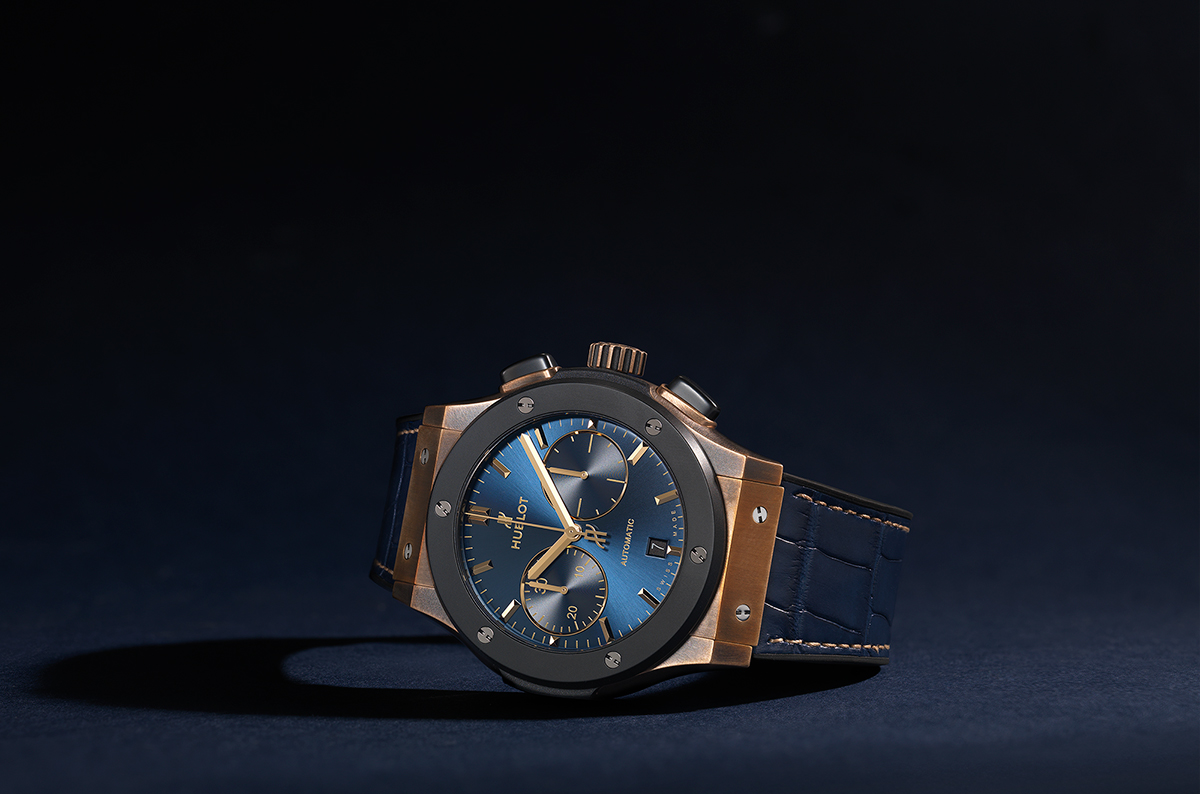 The blue satin-polished dial with a sunray finish further emphasises the masculine design, and a blue rubber strap in combination with alligator leather adds the perfect finishing touches to this impressive creation. This timepiece for the modern gentleman already features a beautiful natural patina, and Hublot’s distinctive bronze, with its subtle yellow and pink undertones, develops its individual character over time, ensuring every watch is a unique piece for its wearer.

The watch has a diameter of 45 mm and boasts a mechanical HUB1112 automatic movement with a 42- hour power reserve and a date display. The new special edition will be available exclusively across Bucherer stores in Selfridges, White City, Covent Garden and also online from 15 November 2018. 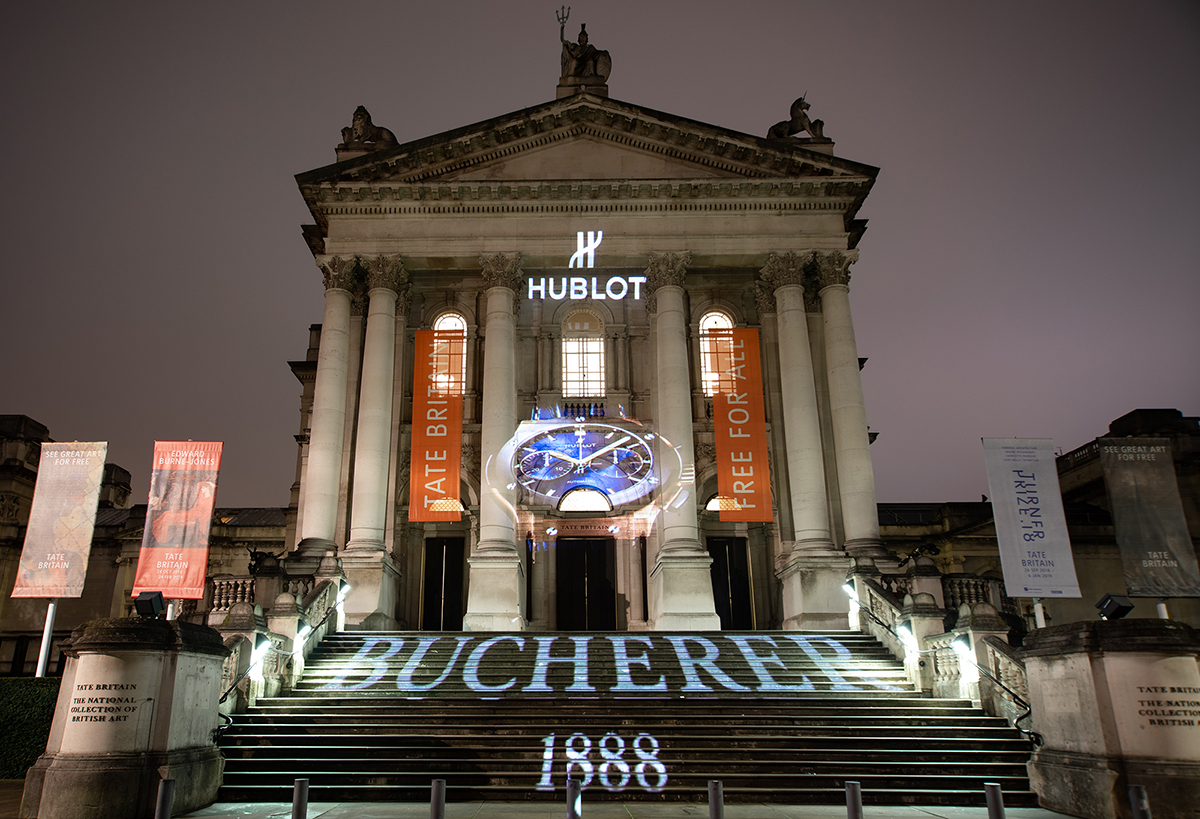 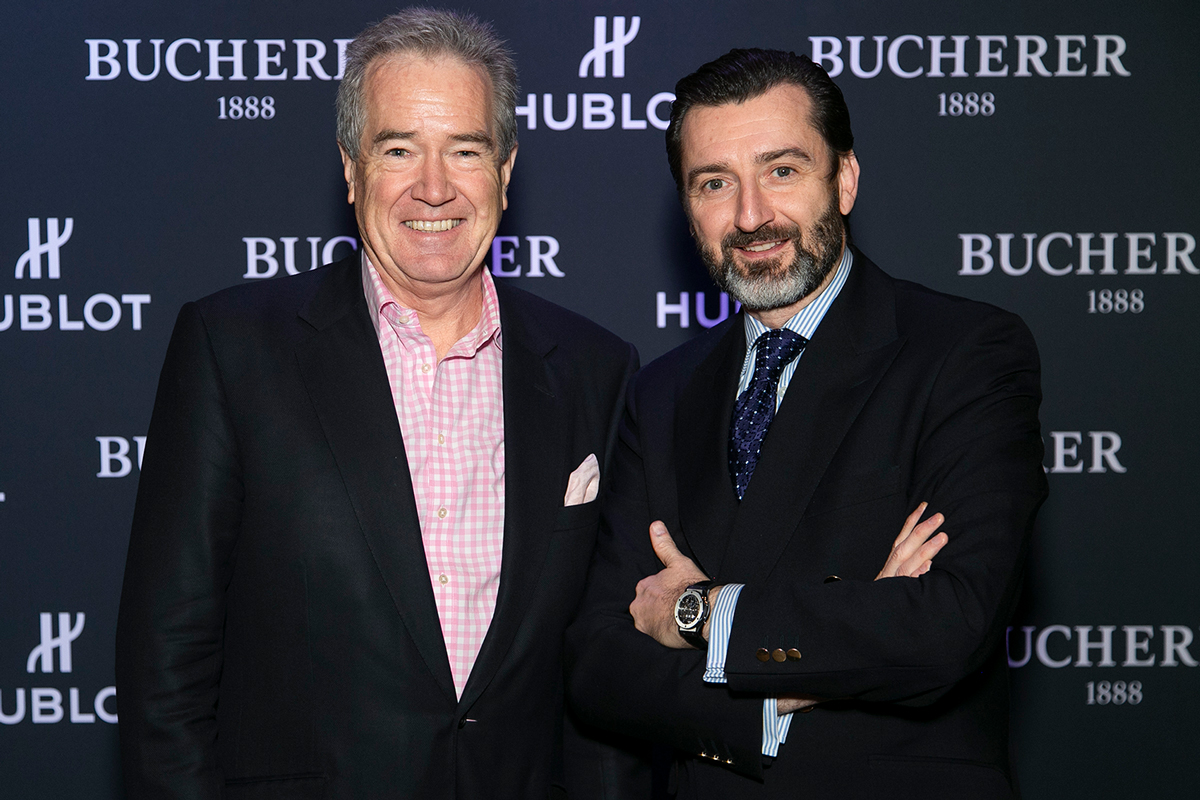 Benoît Lecigne, Hublot General Manager United Kingdom, Ireland, France, Belgium, Luxembourg, Eastern Europe and Scandinavia said: “I am very proud to present this boldly crafted edition with our partner Bucherer. Hublot is honored to be involved in the distinctive Blue Editions which have become an iconic collection for Bucherer. I am confident this edition, which demonstrates the strength and vision of both brands, will be well received and will strengthen our partnership moving forward.”

Patrick Graf, Chief Commercial Officer of Bucherer, adds: “I couldn’t agree more with Mr. Lecigne and we are proud to welcome Hublot to the BLUE EDITIONS family. The Bucherer BLUE EDITIONS are a unique way to demonstrate our strong partnerships with the world’s most renowned watch manufacturers and to offer our customers a collection of extraordinary timepieces they can’t find anywhere else.” 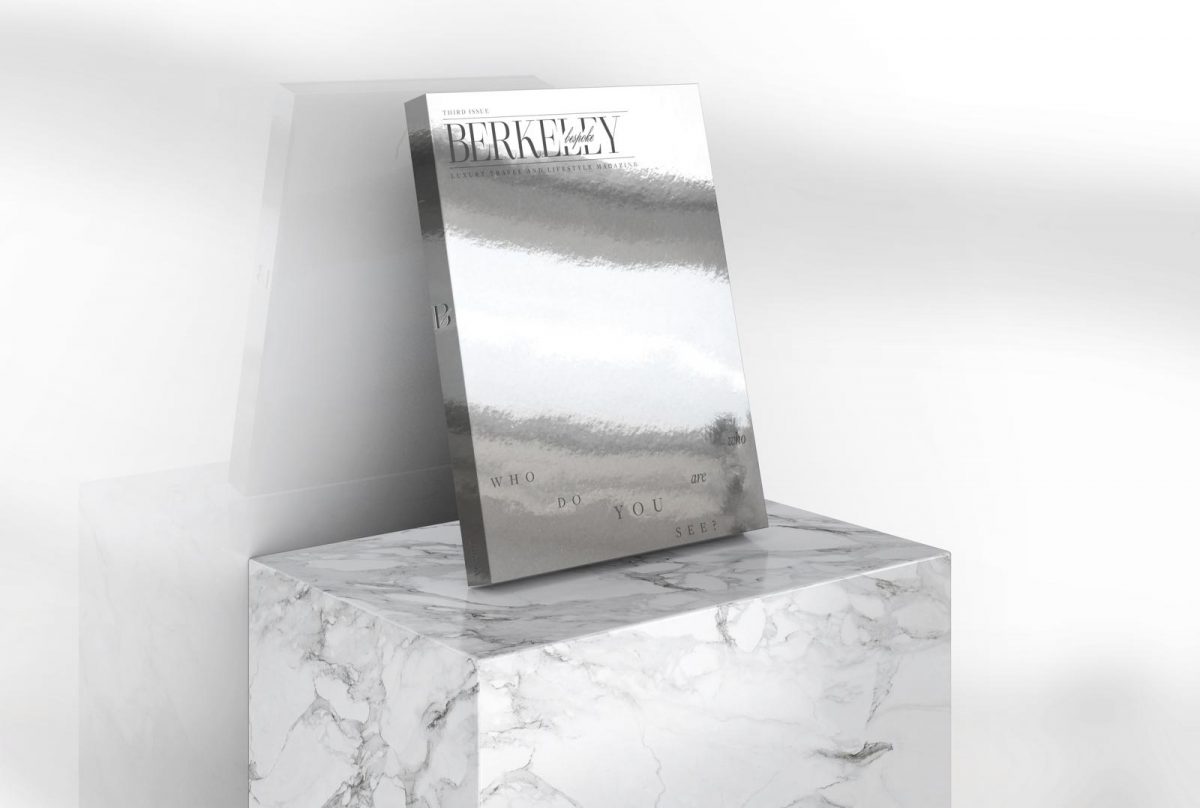 Berkeley Bespoke Magazine is thrilled to present its new Mirror Cover. Emulating The Art of people, a true reflection of our beauty, energy and intentions. 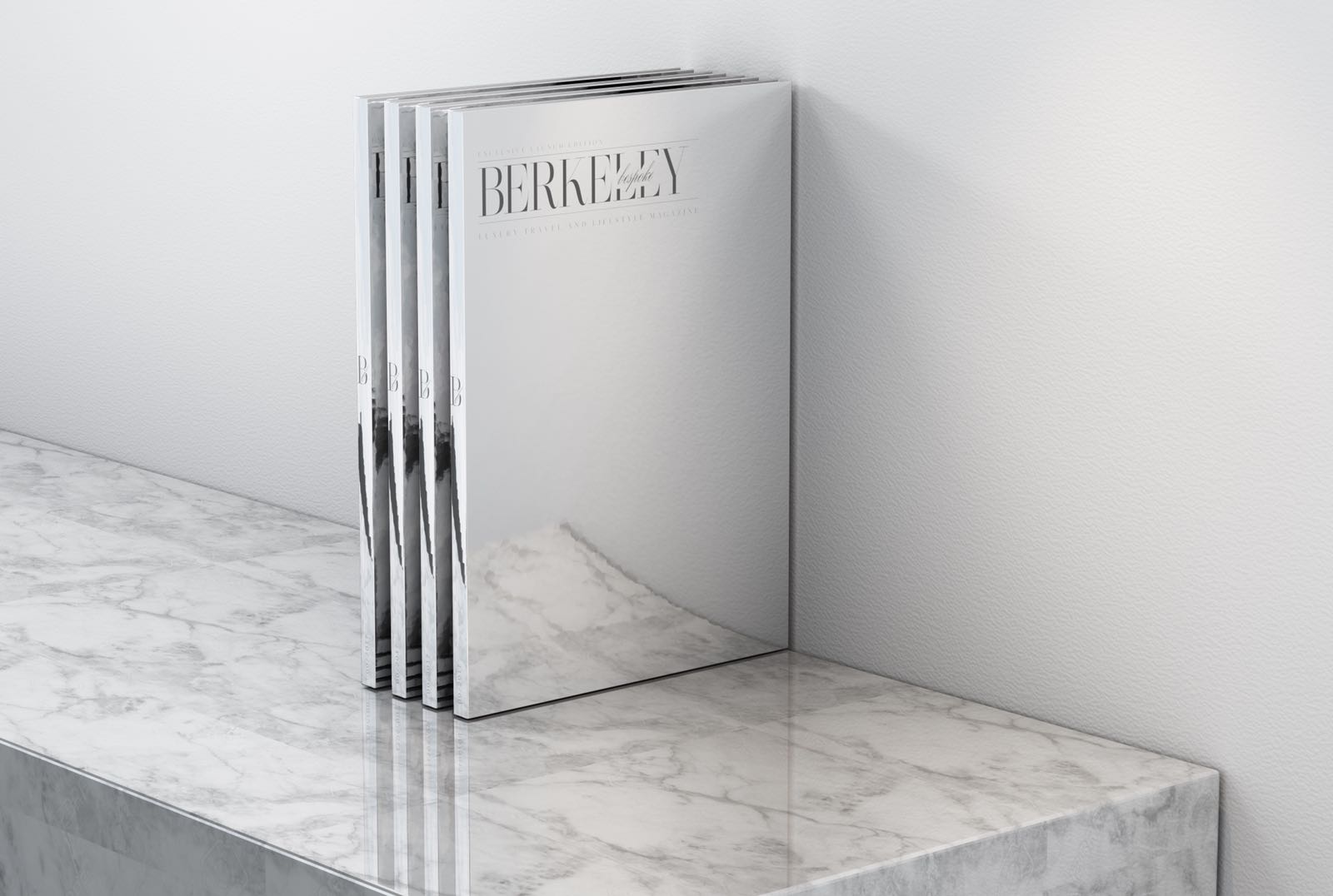 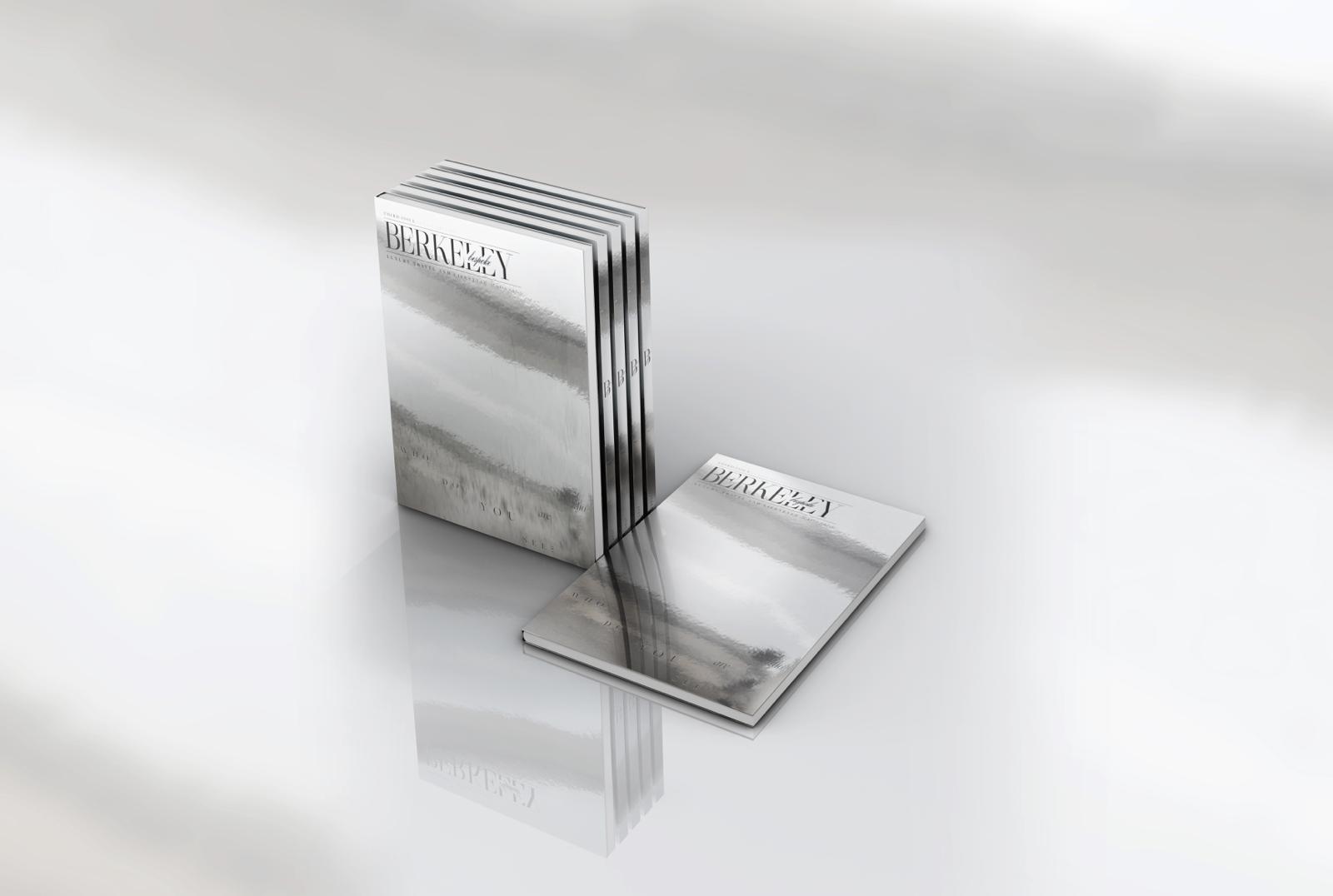 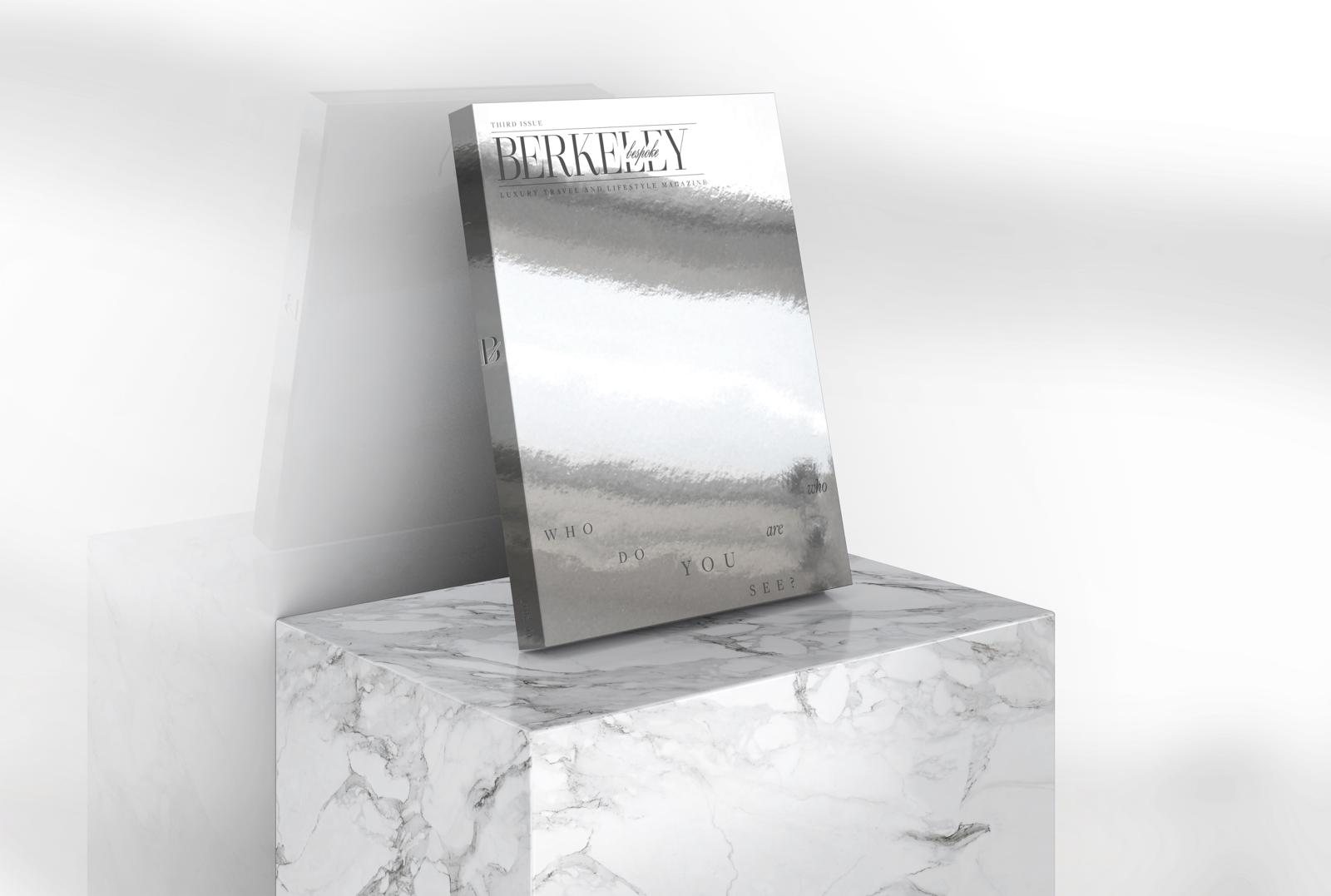 Berkeley Bespoke Magazine is thrilled to announce the reveal of its new Mirror cover. Representing the idea of having a reflection of yourself, seeing the true beauty in you with the importance of sharing your light with the World.

Inspired by the Art of Giving back, the magazine will hold a luxurious collection of Hotels and unique destinations, Art, philanthropy and iconic people.

Berkeley Bespoke Magazine is elegantly presented in a Bespoke sleeve and we can not wait to share our next Limited Edition concept. Could you guess the Artist and the Brand? 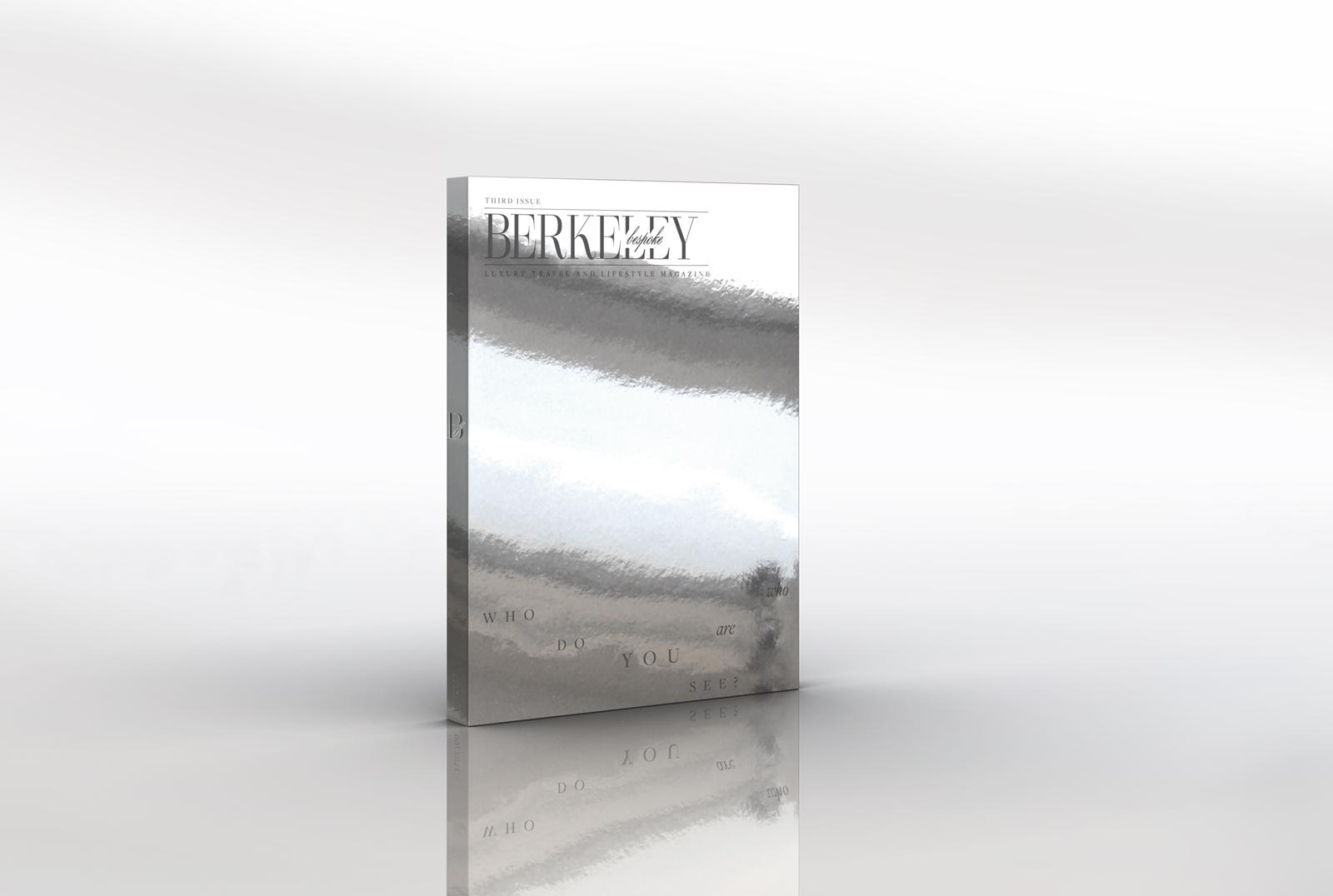 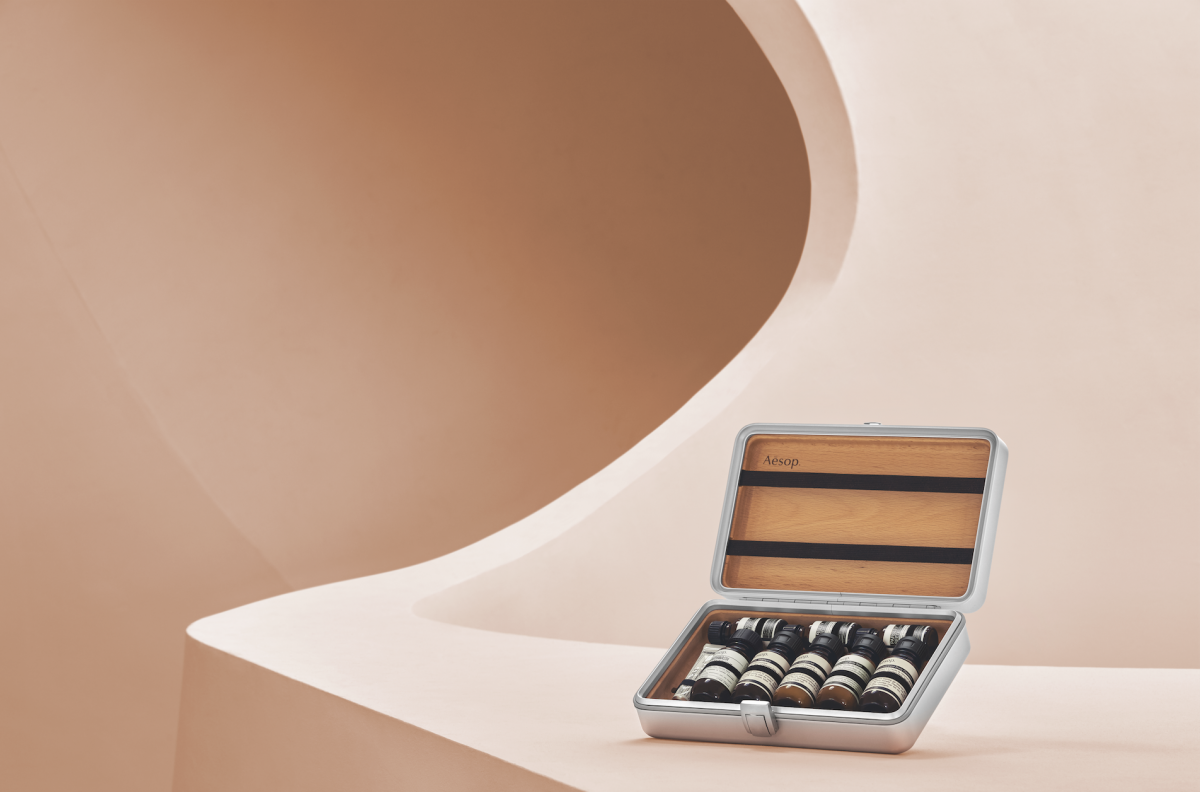 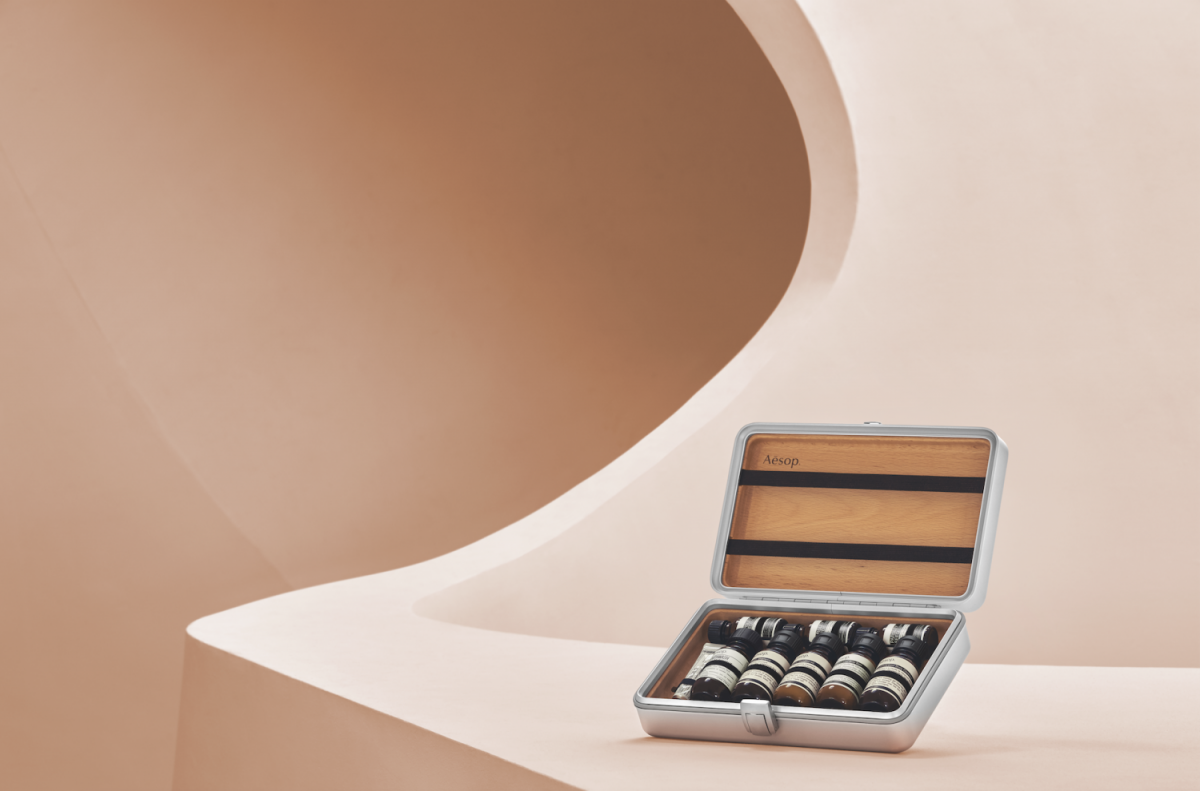 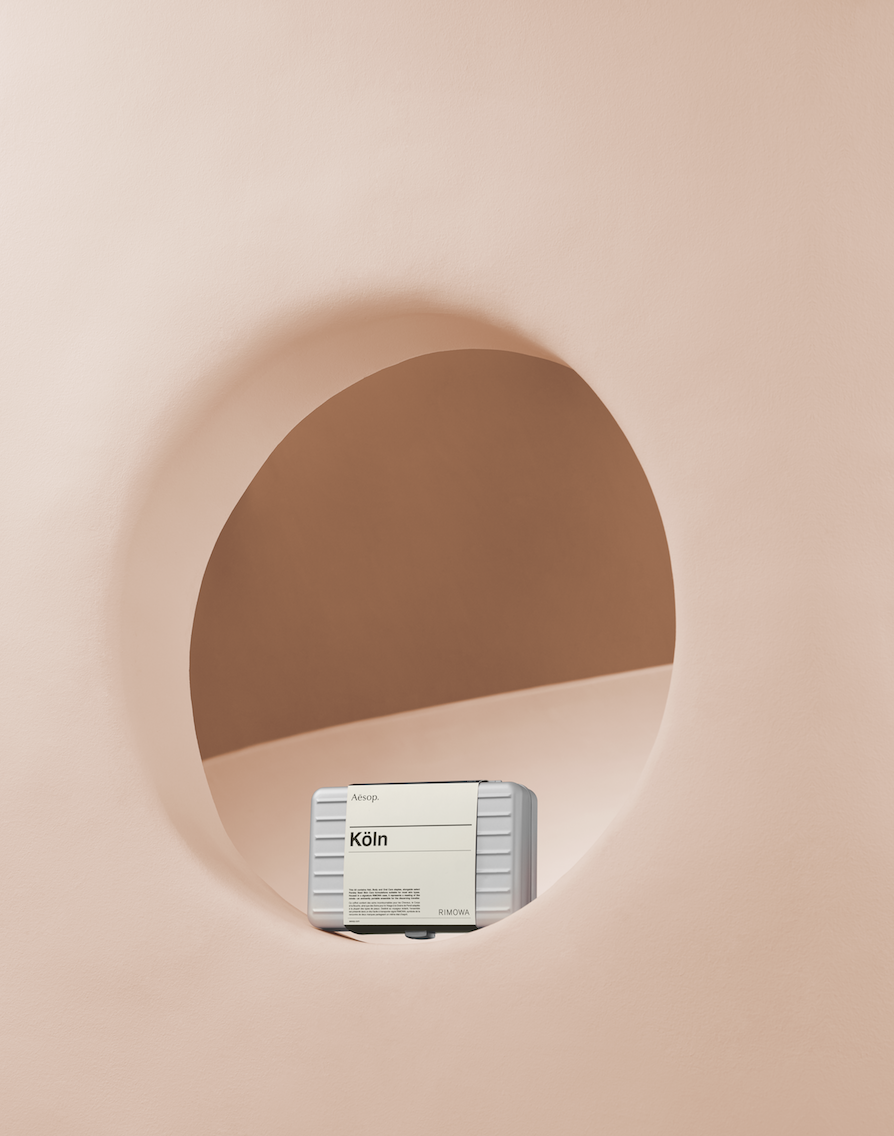 The Köln Travel Kit represents a meeting of like minds – a curated selection of Aesop skin, hair, and body formulations housed in a signature RIMOWA aluminium case.

“Rimowa and Aesop share a meticulous approach to craftmanship and an abiding interest inpared-back utilitarian design,” said Dr Kate Forbes, Aesop GM, Product and R&D. “Our sharedpursuit of quality design led us to collaborate on creating a timeless, portable travel kit with coveted Aesop product for people venturing both near and far from home.”

Inspired by the impeccably crafted RIMOWA Travel Humidor, Aesop’s formulations are securedin a custom-built wooden inlay presented in an elegant RIMOWA case of durable aluminium, which may be reused after its original contents have been enjoyed.

“The Köln Travel Kit is a perfect example of functional luxury; a tool for purposeful travellers that encapsulates the thoughtfulness and consideration that both our brands apply to the creativeprocess,” explains Hector Muelas, RIMOWA Chief Brand Officer.

The kit comprises Classic Shampoo and Conditioner for soft, thoroughly cleansed hair; refreshing Geranium Leaf Body Cleanser and Body Balm; and deeply nourishing Rosehip Seed Lip Cream; complemented by a trio of Parsley Seed Skin Care staples. Suitable for use on most skin types, and ideal for those in urban environments, the Parsley Seed range delivers potent doses of anti-oxidants to fortify the skin and leave it feeling clarified, balanced and supple.

A limited number of Köln Travel Kits will be available for purchase from 26 October 2018 in select Aesop and RIMOWA stores and online. 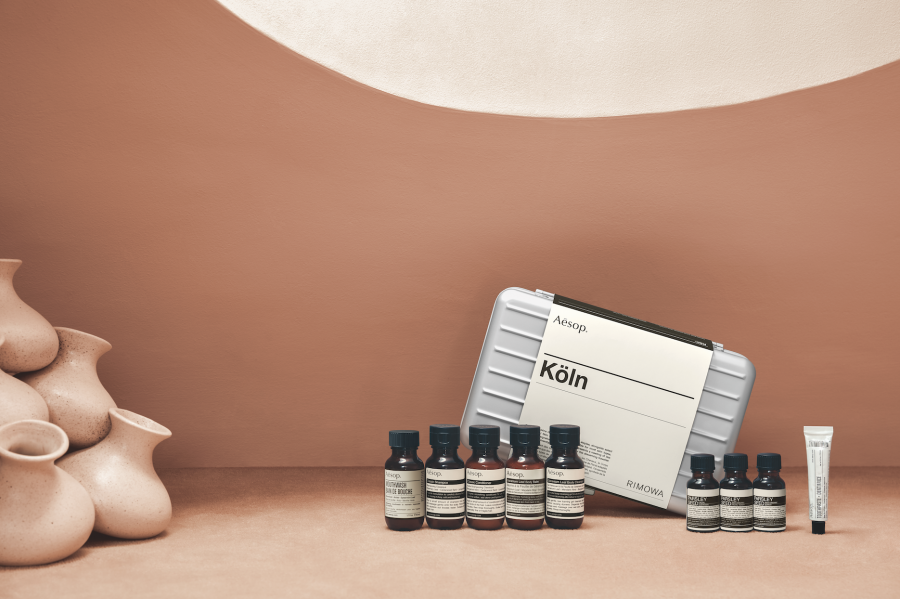