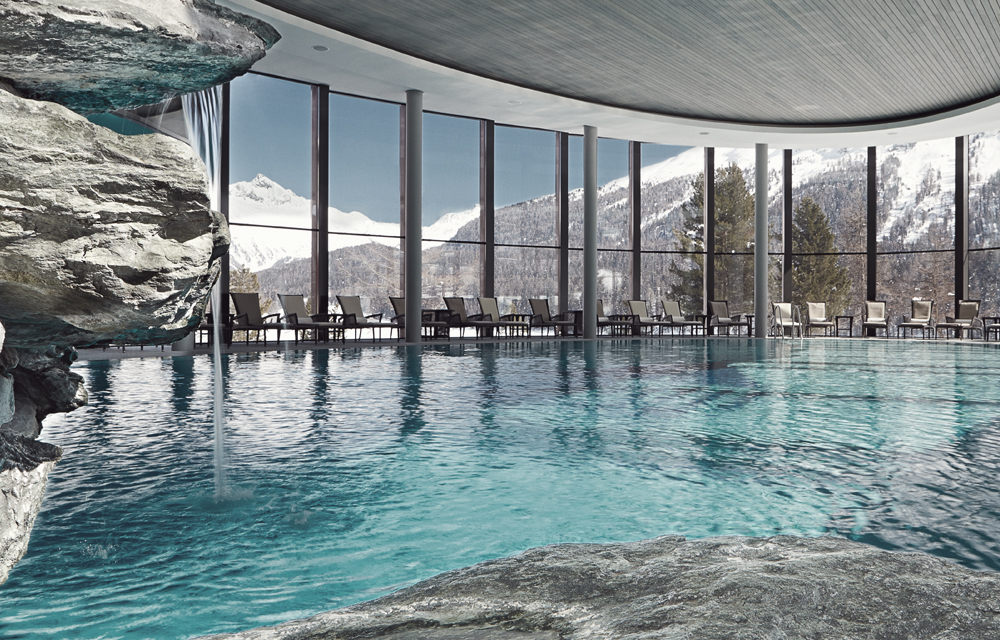 The glamorous Palace overlooks the ski resort’s famous lake, and has been the go-to destination for celebrities and royalty since it first opened in 1896

Rich in heritage and spilling with stories, this distinguished mountain resort houses 157 guest- rooms (37 of which are suites) all with heart-stopping views of the lake or the charming villagecentre, Berkeley Bespoke had the pleasure to experince a real royal stay. Illustrious guests from Rita Hayworth to Alfred Hitchcock have long enjoyed Badrutt’s Palace legendary service that accommodates all tastes, remembers all preferences and embraces all requests, however elaborate. One unsuspecting visitor was greeted by an elephant in the hotel lobby as a birthday surprise from her husband.

A neo-Gothic castle of towers, turrets and terraces, the hotel was designed by Chiodera and Tschudi. Ecclesiastic relics abound; antique benches once used by monks, dark oil paintings andhuge antique chests, many gifted to the Badrutt’s family by people of the church. Unexpected artmasterpieces include an actual Miro sketch in one of the suites. Rooms evoke a timeless charm with Persian carpets, flock wallpaper and brocade-upholstered armchairs, accompanied by terracotta- tiled floors and ornately-carved wood ceilings. 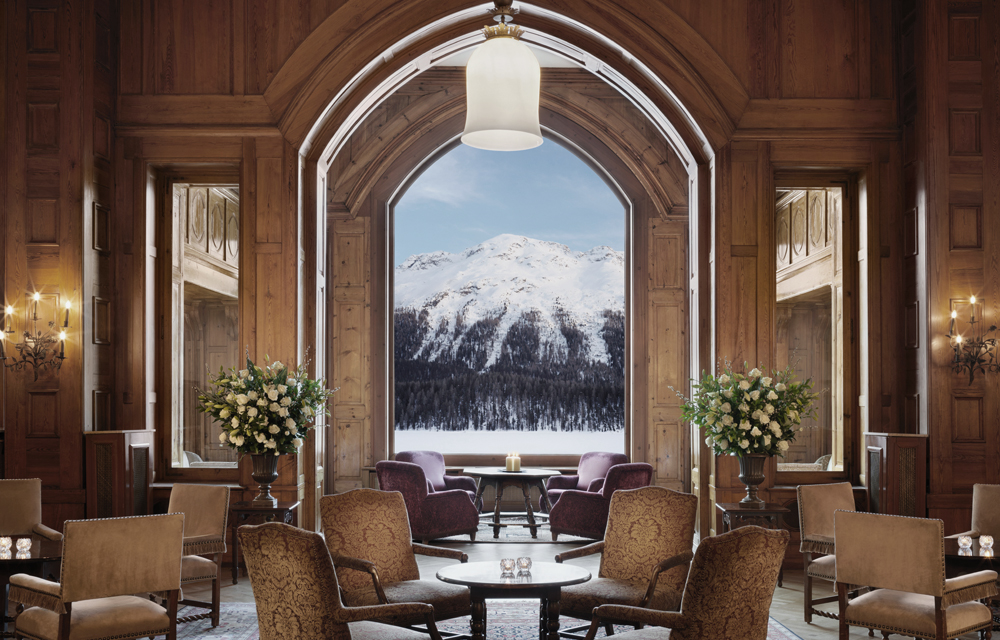 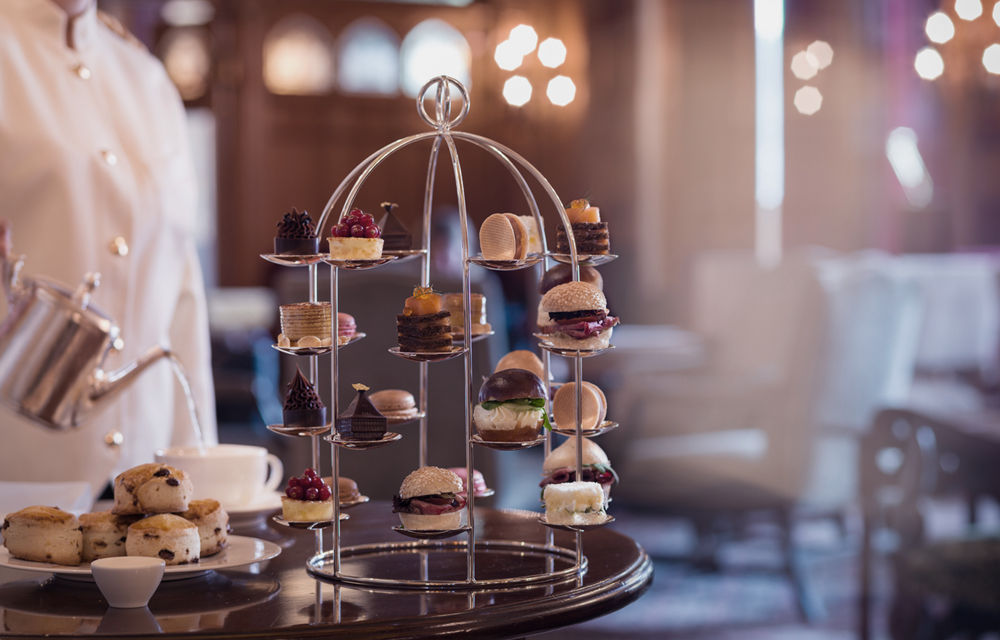 La Coupole restaurant – formerly Europe’s first indoor tennis hall – is home to a Japanese-Peruvian restaurant from Nobu Matsuhisa. Retreat to the Renaissance Bar – the first vintage cigar lounge in continental Europe – for a nightcap or cigar by the big stone hearth or enjoy after hours on the famed dancefloor at King’s Club. Just across the road and up some stairs into the heart of the village is 1658-built Chesa Veglia, the oldest ‘peasant house’ in St Moritz. As Swiss as can be, its two bars and three eateries are a reminder that Italy is only 40 miles south — the Italian-speaking waiters are often told that the pizza at Pizzeria Heuboden rivals the finest from their motherland. 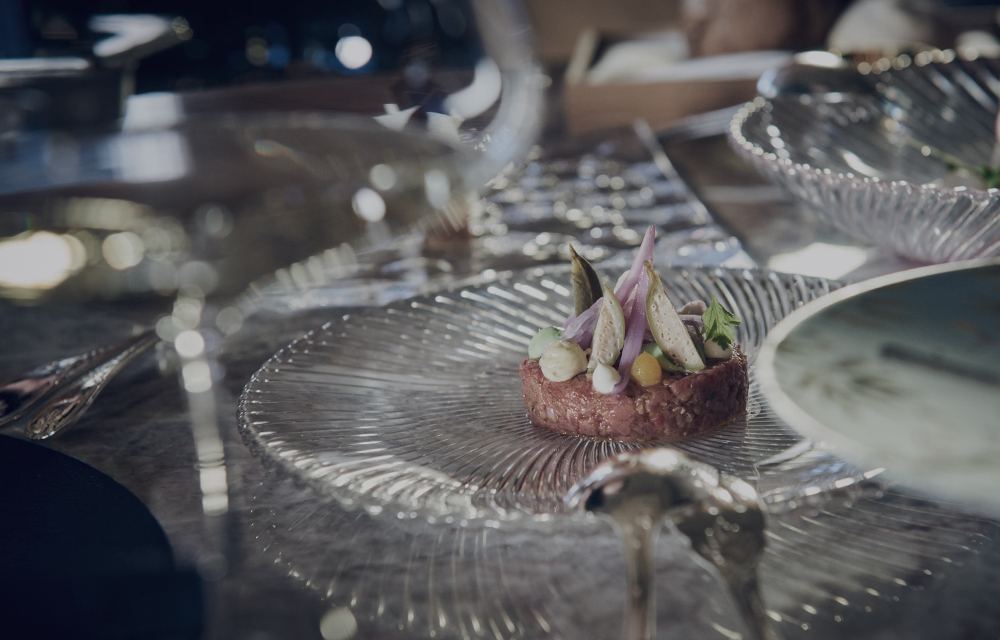 Wellness comes naturally at this Swiss mountaintop village with 300 days of soul-uplifting sunshine and an exceptional air quality. Palace Wellness, the spa, houses a cinematic indoor infinity pool and an open-air heated pool in the dramatic surroundings of the Engadin mountains. Extensive fitness facilities and a Wet Zone include a hydrotherapy pool, saunas, ice roomand aromatic steam rooms. Full massage and beauty services range from Ayurvedic therapies to specialist facials.

Badrutt’s Palace sits at the foot of one of the World’s most exciting ski regions at 6,000 ft, with over 350 kilometres of slopes and an in-house ski rental service, school and boutique. The frozen lake and untouched, natural surroundings encourage a myriad of winter sports including ice skating, sledging, curling, horse carriage trips and the electrifying Cresta Run – one of the fewracing toboggan tracks in the world dedicated entirely to skeleton. And with its own airport it’s nosurprise that St. Moritz was the glitzy backdrop to James Bond gliding down the slopes in ‘The Spy Who Loved Me’. 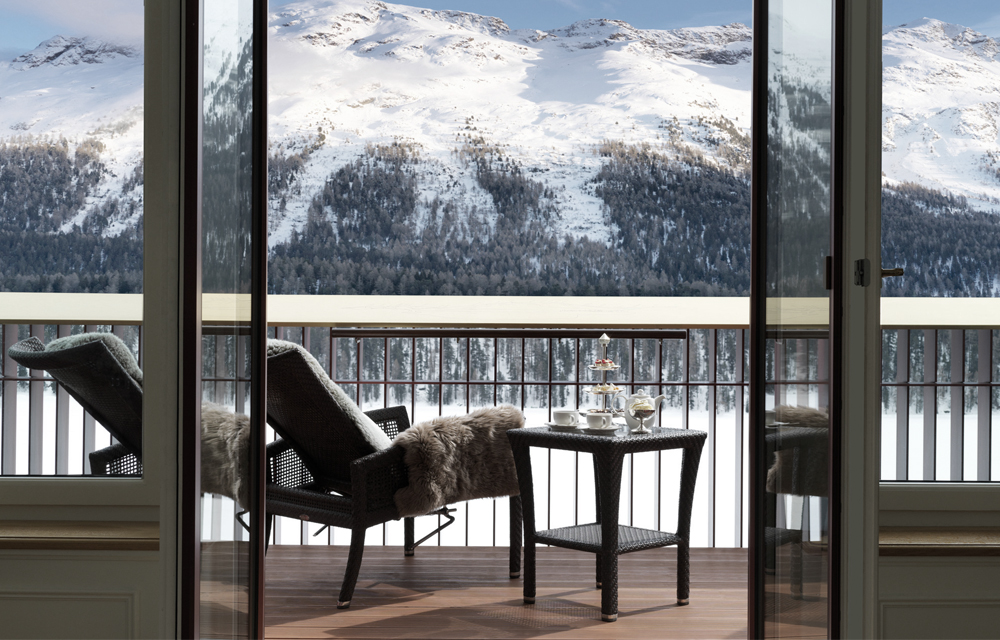 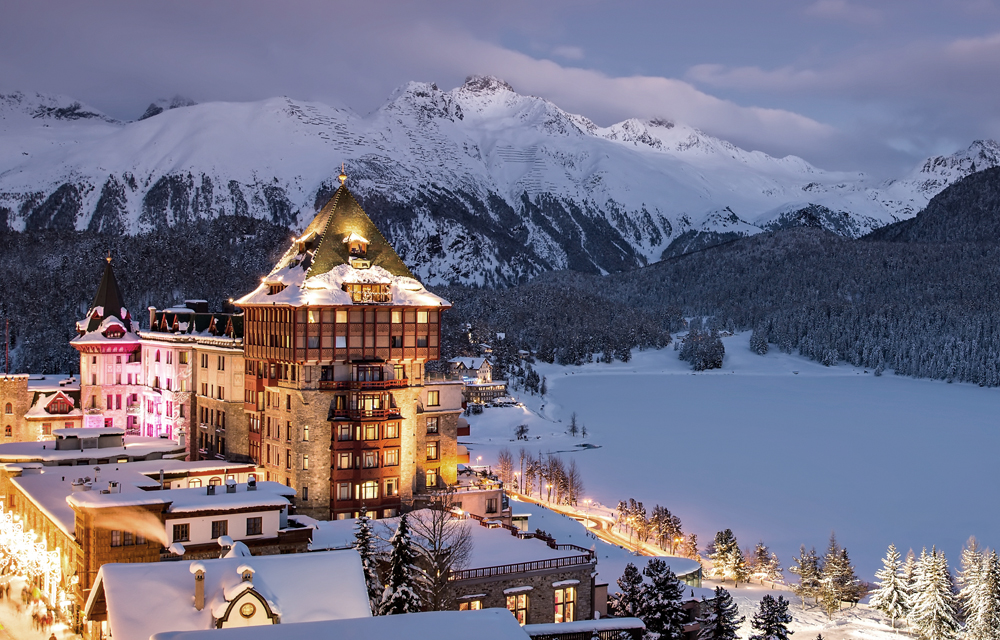 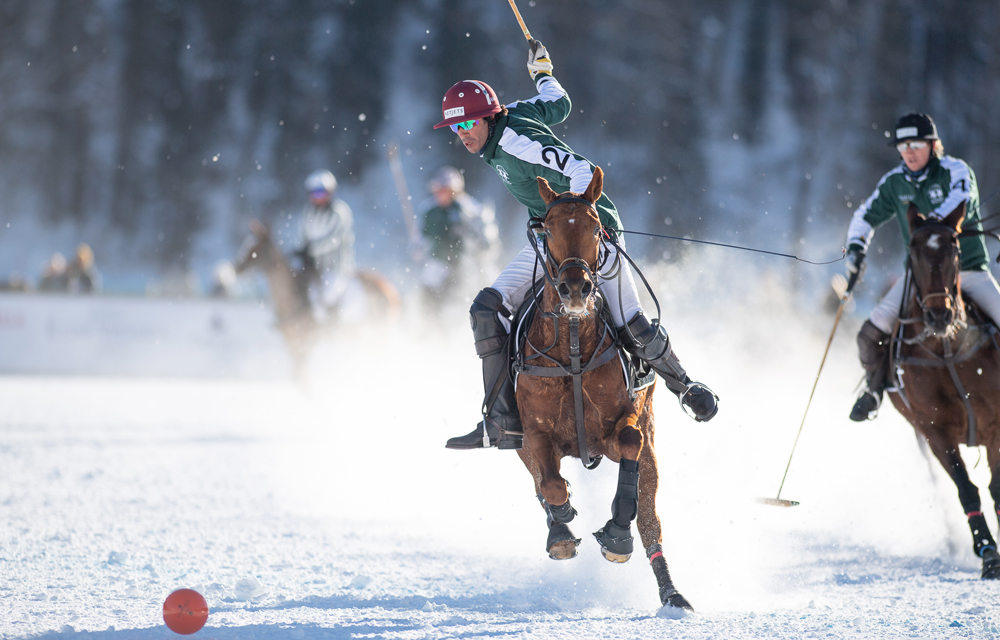 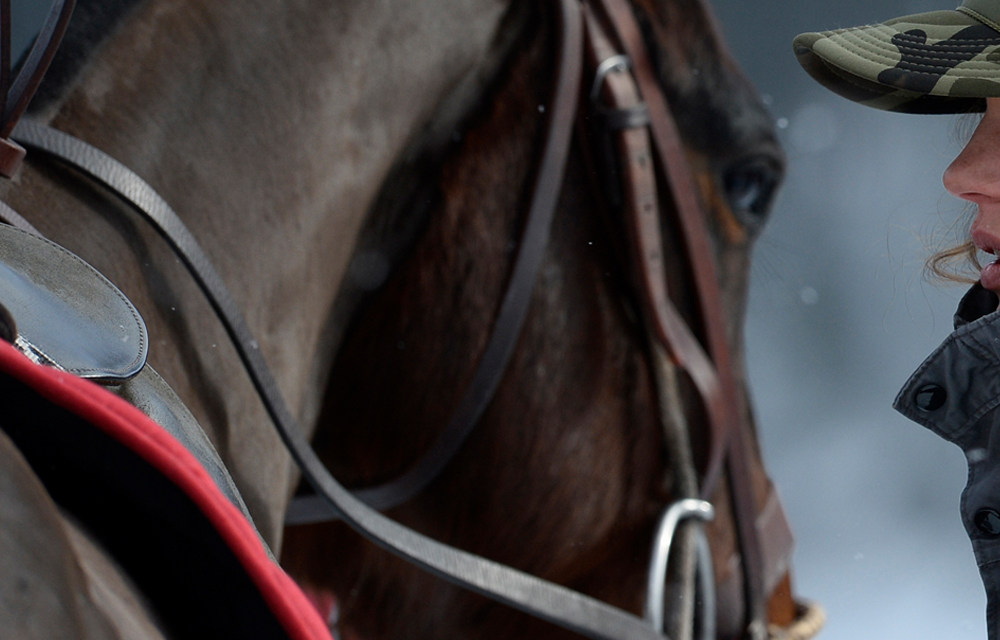 Berkeley Bespoke had the pleasure to attend St. Moritz Snow Polo World Cup – a one of the most spectacular and prestigious sporting events in the World. Held on the frozen lake of St. Moritz, set against the stunning snow-capped mountains of the Engadin Valley it was a magical event.

On the finals day, as the snow began to fall gently upon the spectators thronging around the arena and the packed grandstands, the battle began for the La Martina Cup Subsidiary Final with last year’s winners Team Cartier facing the exuberant Team Azerbaijan Land of Fire. With the collective prowess of the father son duo of Marc and Team Captain, Grant Ganzi, alongside Engadin powerhouse Tito Gaudenzi and the poetry in motion that is 10 goal maestro Juan Martín Nero fresh from his 2018 Argentine Open win, aficionados were expecting an explosive performance from the Cartier shirts. Team Azerbaijan were the underdogs on paper having received a 2 goal advantage to start the match, but this handicap disadvantage was never in evidence as they performed cohesively as a team. Despite the injury to his ear yesterday, Adrian Laplacette Jr was back on fighting form working well alongside his three team mates. 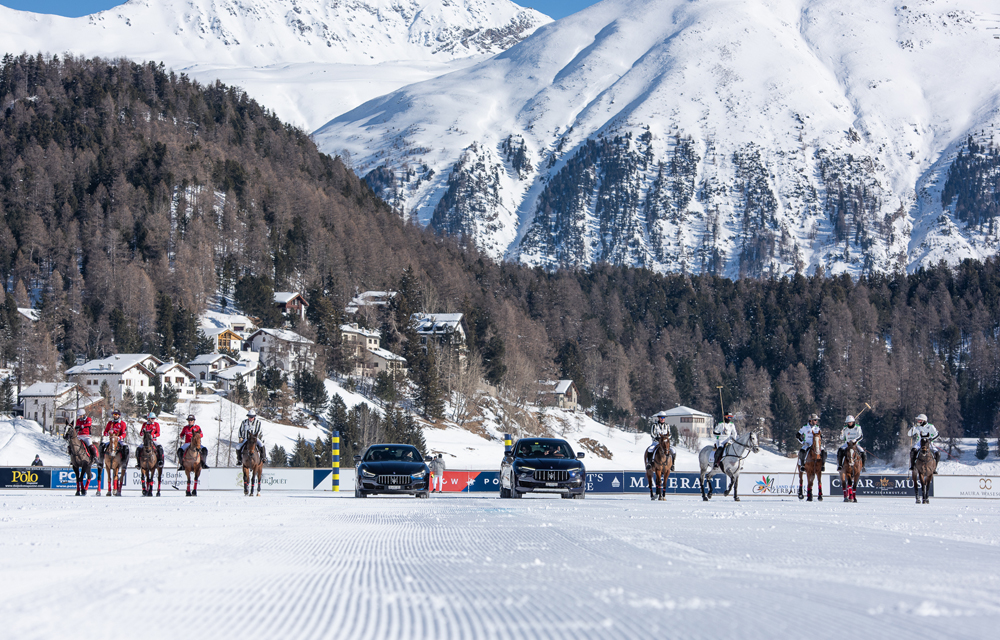 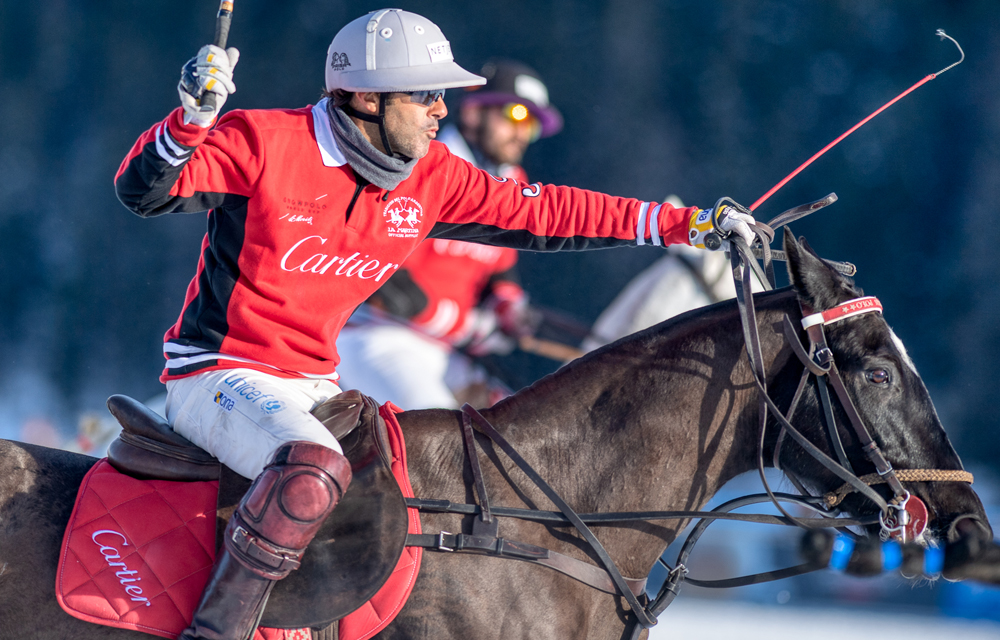 Commentator extraordinaire, Jan-Erik Franck ‘The Voice of Polo’ promised us that in polo “anything can happen”, and he was not wrong, as despite great play and teamwork, Cartier failed to score at all during the match, whilst their opponents found the posts three times to bring the final score to a surprising 5-0 defeat for Cartier at the hands of Team Azerbaijan Land of Fire. Despite his team’s loss, Juan Martín Nero was gracious in defeat, saying: “It is great to be back in St. Moritz. It is such a special tournament; the people, the snow, the great organisation. Everything is fantastic and I can’t wait until next time!”.

The start of the fourth chukka saw yet another goal from the goal scoring tsunami Novillo Astrada for Badrutt’s Palace and so the result seemed inevitable as the score was 7-3 with just minutes left on the clock. However, Charlton was not ready to give up and was firmly on the attack, resulting in Peluso being struck on the hand and falling to the ground in pain. Despite the inevitability of defeat, Maserati remained on the offensive until the last seconds of play, but it was all too little too late, and history was made as Badrutt’s Palace secured the trophy for the first time in the history of the tournament. 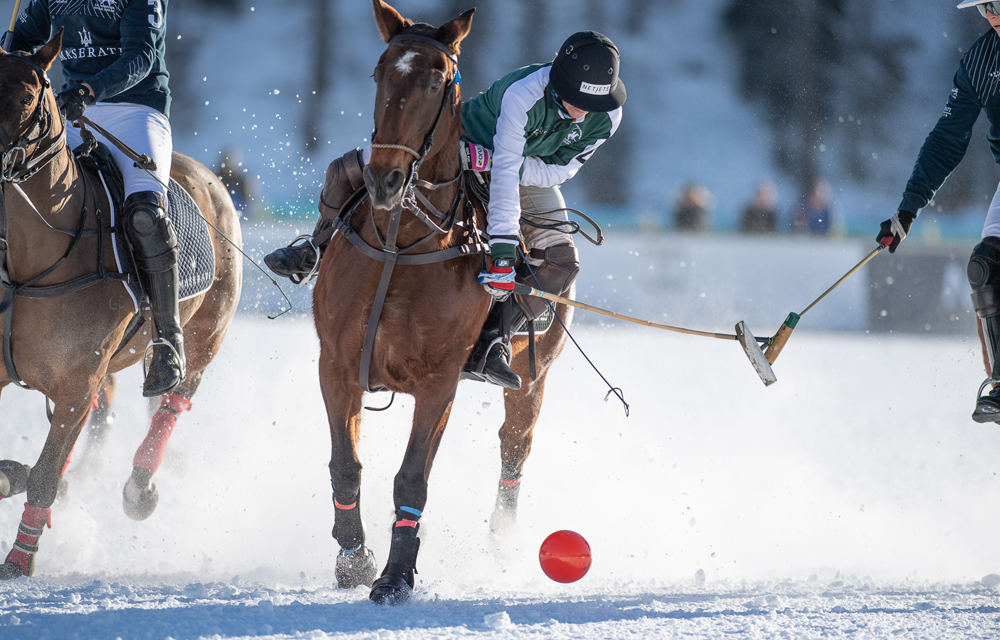 None of the thousands of spectators wanted the three days of thrilling polo action to end. The Snow Polo World Cup St. Moritz 2019 had once again been a triumph at every level and a credit to Reto Gaudenzi and his team. The beautiful resort of St. Moritz had surpassed itself again – alive with sun, hospitality and thrilling polo.

Melissa Ganzi was awarded the trophy for Best Playing Patron and she also  made history as the first female player in the Snow Polo World Cup to win the tournament. 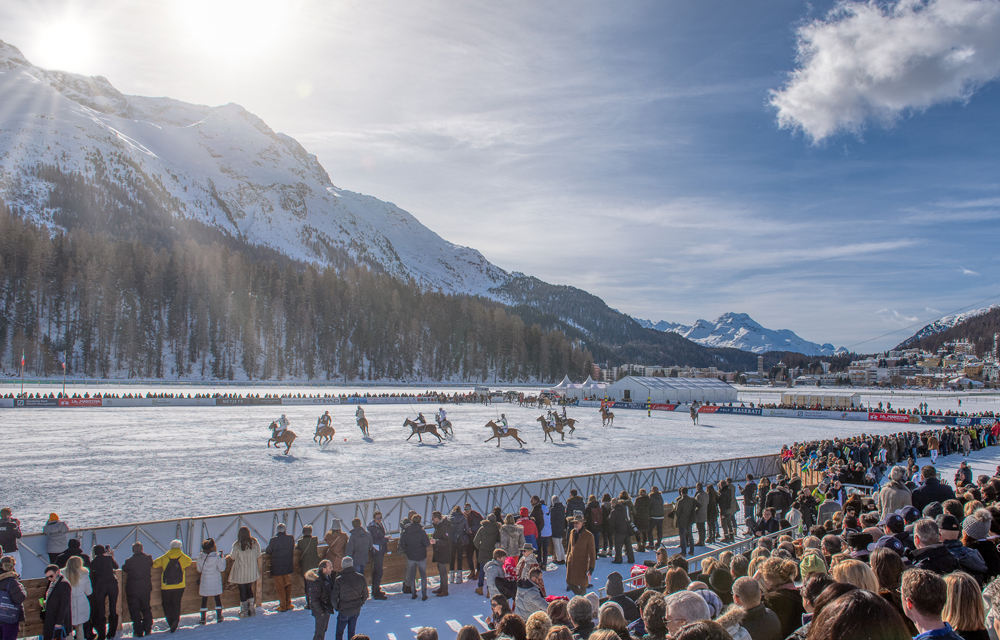 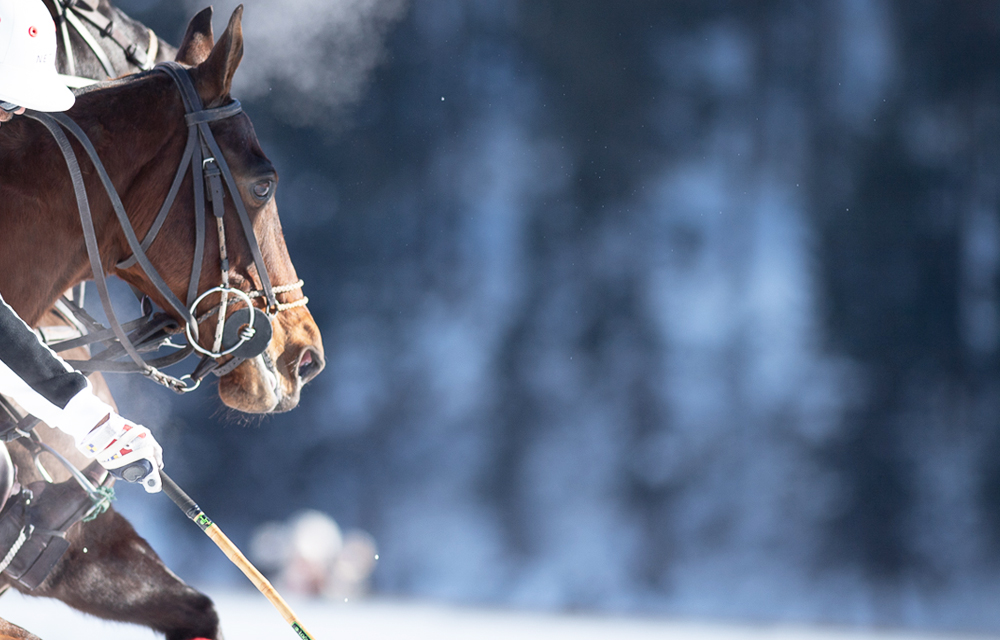 The year 1985 saw the first ever polo competition on snow – it took place in St. Moritz. The Snow Polo World Cup has reigned over the last weekend in January in this mountain town ever since. In 2014, well-known exponents of snow polo in Switzerland founded Evviva Polo St. Moritz Ltd and signed a long-term contract with the city of St. Moritz, thus securing a sustained continuation of the Snow Polo World Cup St. Moritz.

The Board of Directors consists of Dr Piero Dillier (President), Reto Gaudenzi (Vice-president and CEO), and Arndt Küchel. Dr Thomas Rinderknecht and Peter A. C. Blum are on the Advisory Board; Jürg Reinger is the Managing Director. The tournament is organised in close collaboration with an experienced team of local hotels, businesses and experts, the town of St. Moritz and their See Infra Ltd. 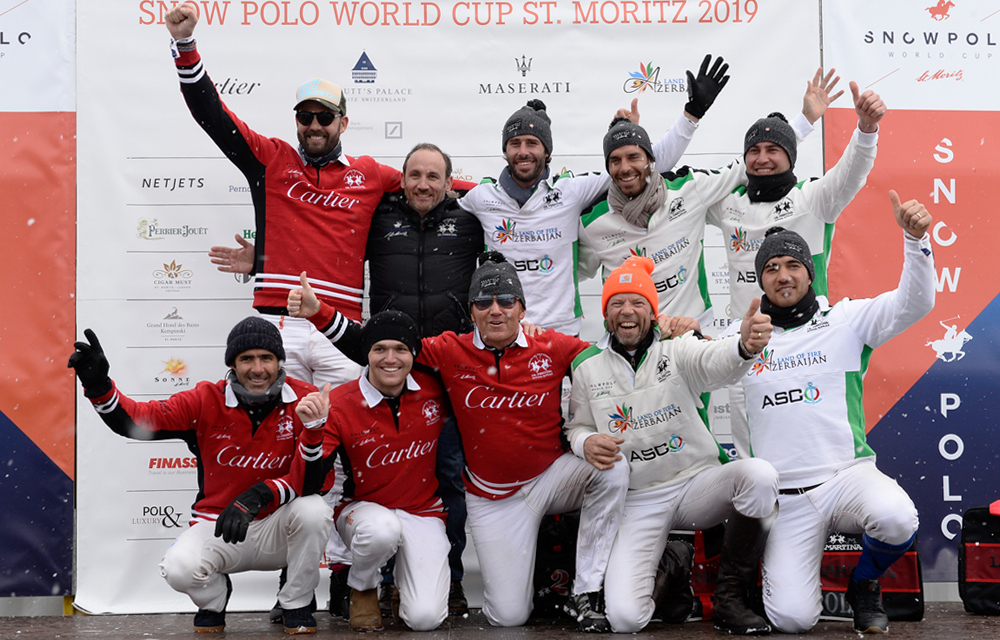